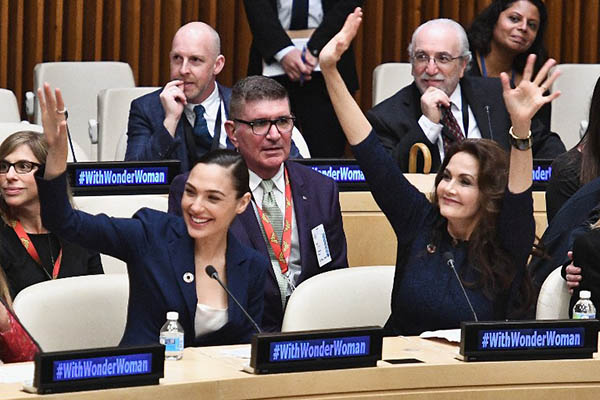 Critics deem appointment ‘ridiculous,’ saying they want a real woman at the post.

The United Nations on Friday designated Wonder Woman to head a women’s rights campaign, drawing angry protests from feminist groups and some U.N. employees who denounced the appointment of a comic-book character as “ridiculous.”

The U.N. tabbed the fictional superhero to lead a yearlong campaign for the “empowerment of women and girls.” But a website created by protesters slammed Wonder Woman as “the epitome of a ‘pin-up’ girl”—“a large-breasted white woman of impossible proportions, scantily clad in a shimmering thigh-baring body suit with an American flag motif.”

Adding to the Hollywood feel, the announcement was made in the presence of the actress Lynda Carter, now 65, who played the part on television, and of Diane Nelson, president of DC Entertainment, the company that owns the rights to the character.

U.N. Secretary-General Ban Ki-moon, who was originally scheduled to attend, was not present. Neither was Antonio Guterres of Portugal, who was recently named as the next U.N. chief despite protests that it was time—after eight men in a row—for a woman to hold the top U.N. position.

Ban’s undersecretary-general for communications, Cristina Gallach, described Wonder Woman as “an icon for her commitment to justice, peace and equality.”

In the back of the room several dozen protesters, both women and men, turned their back to the podium, some of them holding up clenched fists.

The campaign launch coincides with the 75th anniversary of Wonder Woman’s first appearance in a comic book, and ahead of Warner Bros.’ release of a film centered on the statuesque character next year.

Shazia Rafi, a leader of the She4SG movement, which pushed for a woman to succeed Ban as U.N. secretary-general, said it was “ridiculous” to have a campaign for women’s empowerment be “represented by a cartoon when there are so many real-life women who could have been chosen.”

Some 350 U.N. employees had signed a petition urging Ban to drop the Wonder Woman plan.

Visitors to the protesters’ website posted scathing comments, saying “this is a bad joke on all of us,” “absolutely offensive to women” and adding that “to be empowered, women need leadership positions at the U.N.”

Gallach, the U.N. communications chief, said she was aware of such views, but that what mattered more than Wonder Woman’s appearance were “the values and substance that she will represent.”

At a hastily convened news conference Gallach said that the United Nations has also appointed several prominent women as “flesh and blood ambassadors,” including the British actress Emma Watson, the Nobel Peace Prize laureate Leymah Gbowee of Liberia, and Queen Mathilde of Belgium.