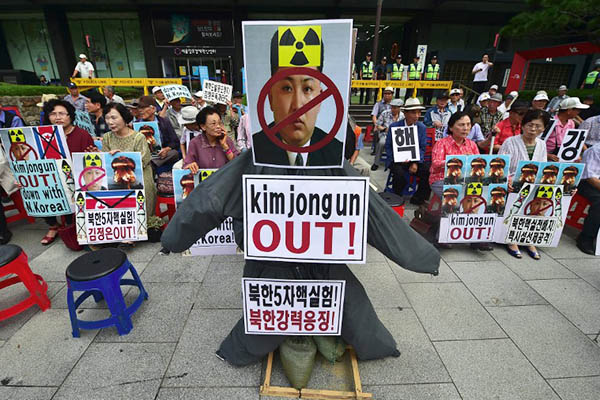 The U.N. Security Council has agreed to start work at once on a new series of sanctions on North Korea after its fifth nuclear test drew global condemnation.

During a closed-door meeting on Friday, the council strongly condemned the test and agreed to begin drafting a new resolution under Article 41 of the U.N. charter, which provides for sanctions.

“The members of the Security Council will begin to work immediately on appropriate measures under Article 41 in a Security Council resolution,” New Zealand’s Ambassador Gerard van Bohemen, who holds the council’s rotating presidency, told reporters after the urgent talks.

South Korea, the United States, Japan, Russia and China all condemned the blast at the Punggye-ri nuclear site, the North’s most powerful yet at 10 kilotons. In Seoul, dozens of protesters burned an effigy of the North’s leader Kim Jong-Un and North Korean flags and called for “strong retaliation,” including pre-emptive attacks on the North’s nuclear complex.

Some newspapers were equally scathing. “South Korea left unguarded before nuclear maniac,” read the banner headline of the top-selling Chosun Ilbo. But the North’s ruling party newspaper said on Saturday it would not submit to U.S. nuclear “blackmail,” and described the South’s President Park Geun-Hye as a “dirty prostitute” for working with U.S. forces. “Gone are the days never to return when the U.S. could make a unilateral nuclear blackmail against the DPRK,” said Rodong Sinmun, using the country’s official name.

The Security Council met at the request of Japan, South Korea and the United States to agree on a response, despite resistance from Pyongyang’s ally China to calls for tougher measures. After the meeting China’s Ambassador Liu Jieyi sidestepped questions about Beijing’s support for sanctions.

“We are opposed to testing and we believe that it is more urgent than ever to work together to ensure denuclearization of the Korean peninsula,” Liu said. “All sides should refrain from mutual provocation and any action that might exacerbate the situation.”

North Korea has been hit by five sets of U.N. sanctions since it first tested a nuclear device in 2006. After Pyongyang carried out its fourth nuclear test, the council in March adopted the toughest sanctions resolution to date targeting North Korea’s trade in minerals and tightening banking restrictions.

But since that measure was adopted, North Korea has carried out 21 ballistic missile launches, U.S. Ambassador Samantha Power said, describing those tests and Pyongyang’s second nuclear detonation this year as “more than brazen defiance.”

“North Korea is seeking to perfect its nuclear weapons and their delivery vehicles so they can hold the region and the world hostage under threat of nuclear strike,” Power said.

Pyongyang’s state media said on Friday the nuclear test had realized the country’s goal of being able to fit a miniaturized warhead on a rocket. “Our nuclear scientists staged a nuclear explosion test on a newly developed nuclear warhead at the country’s northern nuclear test site,” a TV presenter said.

The first indications of an underground explosion came when seismic monitors detected a 5.3-magnitude “artificial earthquake” on Friday near the Punggye-ri nuclear site. “The 10-kiloton blast was nearly twice the [power of the] fourth nuclear test and slightly less than the Hiroshima bombing, which was measured about 15 kilotons,” said Kim Nam-Wook of the South’s meteorological agency.

North Koreans gathered around public screens to watch the official announcement of the test, which came on the 68th anniversary of the country’s founding.

The nuclear program has accompanied a series of ballistic missile launches, the latest of which took place on Monday as world powers gathered for a G20 meeting in China.

This week’s events pose yet another challenge for China, which has been under pressure to rein in its increasingly aggressive neighbor. Beijing strongly condemned the test, but has limited room to maneuver. Its priority is to avoid the regime’s collapse, which would create a crisis on its border and potentially shift the balance of power on the Korean peninsula toward the United States.