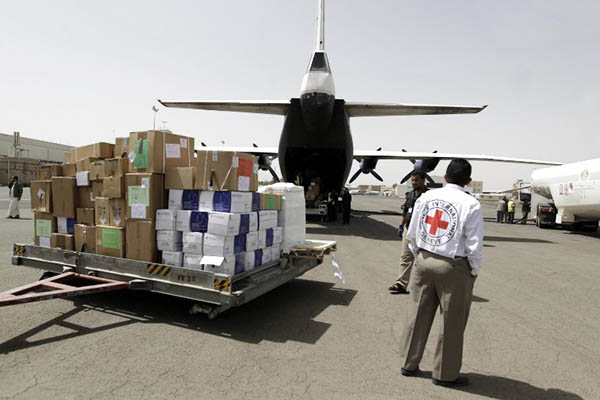 Global body’s official says insufficient aid is coming through to cater to those affected by the Saudi-led airstrikes.

The United Nations called Friday for an immediate “humanitarian pause” of at least a few hours each day in Yemen to allow desperately needed aid to enter the conflict-ravaged country.

The Red Cross and U.N.’s children agency finally managed Friday to get two planeloads of medical aid into the country—the first to reach Sanaa since Saudi-led airstrikes against the Shia Houthi rebels began last month. Doctors Without Borders also managed to get a boatload of aid to Aden earlier this week.

But Johannes Van Der Klaauw, the U.N.’s humanitarian coordinator in Yemen, insisted that the aid that got through was far from enough. Speaking to reporters in Geneva, he called for an “immediate humanitarian pause in this conflict.”

Iran-backed Shia Houthi rebels have seized swathes of territory in Yemen since they entered Sanaa last September, forcing the government to flee. Yemen has slid deeper into turmoil after a Saudi-led air campaign began on March 26 to push back the rebels’ advance after they forced President Abedrabbo Mansour Hadi to flee the country.

The World Health Organization said nearly 650 people have died and more than 2,200 have been injured in the fighting in Yemen, but the actual number of casualties is likely far higher since many people are not reaching hospitals but are being buried immediately, Van Der Klaauw said. He insisted on the importance of opening “a window of opportunity” to bring aid to civilians amid fears of a mounting humanitarian crisis.

Even before the latest escalation, some 16 million Yemenis were in need of humanitarian assistance and nearly half of all Yemeni children were considered chronically malnourished. “This was already one of the largest and most complex humanitarian emergencies in the world,” Van Der Klaauw said, pointing out that the violence risks leading to severe food shortages.

Shortages of fuel also means water pumps will soon stop working, and Van Der Klaauw warned that in Aden alone, “one million people risk being cut off from access to clean drinking water within a matter of days.”

“The situation in Aden is extremely, extremely preoccupying if not catastrophic,” he said, warning that Yemen’s second largest city had fallen prey to “urban warfare” and “uncontrollable militias.”

The recent violence has meanwhile displaced around 100,000 people inside Yemen and pushed thousands more to leave the country. The U.N. refugee agency said Friday more than 900 refugees had arrived in Djibouti and Somalia from Yemen by boat over the past 10 days.

“The refugees tell us many more people are trying to leave Yemen but are being prevented from doing so by fuel shortages and high fees charged by boat operators,” UNHCR spokesman Adrian Edwards told reporters.

The International Organization for Migration meanwhile said it had assisted some 5,000 people who had left Yemen for Djibouti, Ethiopia and Somalia. It was unclear though how many of those people, who had left Yemen by plane and boat, were considered refugees.

Edwards said UNHCR was making contingency plans to be able to receive up to 100,000 refugees from Yemen in Somalia and another 30,000 in Djibouti over the next six months. Before the recent crisis began, UNHCR was already assisting some 250,000 mainly Somali refugees inside Yemen, as well as some 330,000 internally displaced Yemenis.