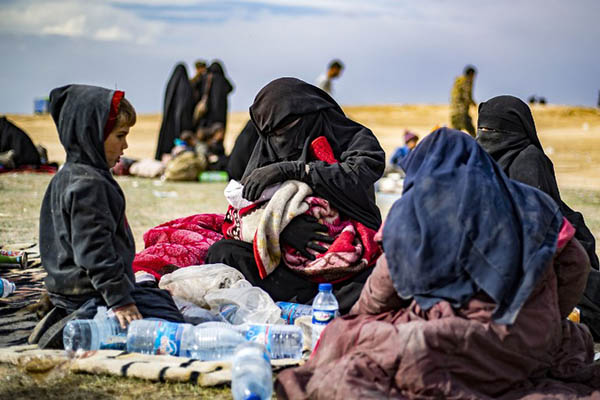 UNICEF’s Middle East director says children raised in I.S. camps should not be categorized as ‘terrorists’

Children raised in the Islamic State group’s “caliphate” should not be treated as terrorists, the United Nations’ Children Fund (UNICEF) warned on Monday.

The agency’s Middle East director said the fate of children whose jihadist families recently fled I.S.’s last bastion in northeastern Syria should not be ignored. “The message that these children are not wanted is growing stronger and stronger,” Geert Cappelaere said at a press conference in Beirut.

According to UNICEF, an estimated 3,000 foreign children are currently housed at the Al-Hol camp, which has taken in most of the massive influx of people fleeing the scrap of the I.S. “caliphate” in recent weeks. They originate from at least 43 different countries, many of which have been reluctant to tackle the issue of their possible repatriation.

There are even larger numbers of displaced Syrian and Iraqi children who are associated with I.S. and whose reintegration in society is a challenge that is getting scant attention.

“This is a problem that cannot be swept under the carpet,” said Cappelaere, speaking at the launch of a CD of children’s song coinciding with the eighth anniversary of the conflict in Syria. “These are situations that are not necessarily unprecedented, look back at the Rwandan genocide in the mid-nineties,” he added. “We saw thousands of children there who were associated with people who had been committing atrocities. These children have for a big part been successfully reintegrated within the Rwandan society,” he said.

Cappelaere said such efforts are needed in Syria and Iraq. “There is a solution for these children. It requires political courage, political commitment. These children are children, they are not terrorists,” he said.

He said a total of five million children were born since the start of the conflict in 2011. While fighting has wound up in several parts of Syria in recent months, millions of Syrian children remain in need of basic humanitarian assistance.

“Let’s not allow ourselves to be fooled by claims of military victory, there is so far little to be gained from the children’s perspective,” Cappelaere said.

International efforts have consistently failed to stop one of the deadliest wars of the century, with more than 360,000 people killed since 2011, and more than half of Syria’s pre-war population of 20 million displaced.