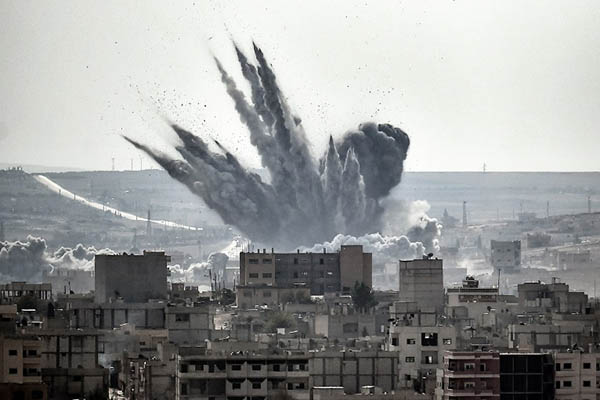 Inquiry into November strikes finds no evidence of wrongdoing by military forces overseeing the assault.

“We regret the unintentional loss of lives,” Lieutenant General James Terry, head of the U.S.-led air campaign against the Islamic State group, said in a statement, citing the results of an investigation.

The airstrikes on Nov. 5-6 last year were targeting members of the Khorasan group, an offshoot of Al Qaeda, in Harim City, according to the inquiry’s conclusions. “The strikes were designed to destroy targets utilized by Khorasan group-affiliated extremists to meet and manufacture explosives,” the report said.

But the bombing killed two children, including the daughter of a militant, and caused “minor injuries” to two civilian workers who lived near the buildings that were targeted, it said.

In assessments prior to the air raid, there were no reports that children could be in the area, the probe concluded.

The airstrikes were carried out in accordance with extensive rules designed to avoid civilian deaths and the targets were deemed “valid military targets,” it said. The report found no wrongdoing or negligence by military forces overseeing or carrying out the strikes.

Human rights groups have alleged dozens of civilians have been killed in various airstrikes on extremists in Syria and Iraq. But Pentagon officials had maintained previously that they could not confirm with certainty that any civilians had been inadvertently killed in the U.S.-led air campaign in Iraq and Syria, despite more than 4,000 bombing raids.

The air war was launched in Iraq in August and extended to Syria in September.

Military investigators had reviewed an account of the strike from the Syrian Network for Human Rights, statements from Syrian “civil society contacts” to the State Department and video from the strike, the inquiry report said. “It is important to note that the current environment in Syria and Iraq makes investigating these allegations extremely challenging,” Pentagon spokeswoman Commander Elissa Smith said. “Traditional investigative methods, such as interviewing witnesses and examining the site, are not typically available,” she said. “However, we also consider information provided to us by other U.S. government departments and agencies such as human rights documentation groups, and we seek to investigate as thoroughly as possible given the limitations.”

U.S. defense officials had previously said the same strikes in Syria in November 2014 had killed a French bombmaker, David Drugeon, who was portrayed as a key figure in the Khorasan group.