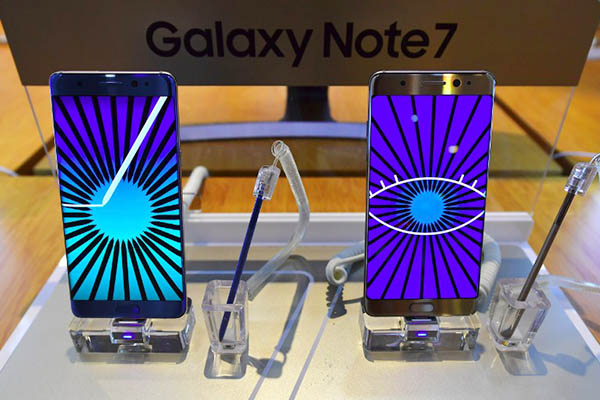 Smartphone batteries have been shown to explode or burn while charging, prompting recall of 2.5 million units.

The warning by the independent government agency came a day after the U.S. Federal Aviation Administration told passengers not to turn on or charge Galaxy Note 7 smartphones on aircraft due to the risk of batteries exploding. The FAA also advised passengers not to stow Galaxy Note 7 devices in checked baggage, evidently to avoid the risk of fires in cargo holds of aircraft.

Qantas and Virgin Australia also told customers not to use or charge the devices on their planes.

The South Korean smartphone maker last week suspended sales of the phablet and recalled 2.5 million units following of problems with batteries exploding or burning while charging.

“When these batteries overheat and burst, the results can be serious,” the commission said in a statement, calling on “all consumers who own a Samsung Galaxy Note 7 to power them down and stop charging or using the device.”

It is the first large-scale recall of one of Samsung’s top range phones. Along with the recall, Samsung has been forced to delay the handset’s planned release this month in several European countries including France.

The battery trouble comes as Samsung’s rival Apple launches new iPhone 7 models, with the California company predicting brisk sales as it began taking orders on Friday. The mobile division accounts for the lion’s share of Samsung’s business, but has been increasingly squeezed by competition both from Apple’s iPhone and by lower-end devices from Chinese rivals such as Huawei.