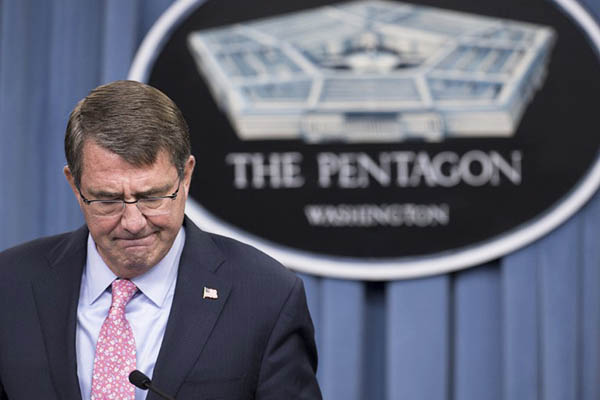 The strike appears to have been “a mistake that involved both sides,” Carter told reporters, adding that he had called Iraqi Prime Minister Haider al-Abadi to express condolences.

Carter made his remarks, which were broadcast widely in U.S. media, while on a visit aboard the USS Kearsarge, an amphibious assault ship supporting coalition missions in Iraq and Syria against the Islamic State.

U.S. media reported that the airstrike is believed to be the first friendly fire incident in the coalition war on I.S. The Pentagon chief did not say how many soldiers died in the attack, but Iraqi officials put the toll at 10 dead.

“These kinds of things happen when you’re fighting side by side as we are,” Carter told reporters, calling Friday’s airstrike, near Fallujah, “regrettable.”

The incident “has all the indications of being a mistake of the kind that can happen on a dynamic battlefield,” he said.

A U.S. military statement said all coalition airstrikes against I.S. are conducted with the approval of the Iraqi government. “To the best of our knowledge, there have been no previous incidents of friendly fire in Iraq involving the coalition during the course of Operation Inherent Resolve,” it added, using the name for the coalition air campaign.

Carter, who visited Afghanistan on Friday, will fly to Moscow on Sunday for talks on Syria. On Saturday, he visited France’s Charles de Gaulle aircraft carrier in the Gulf, which is being used to launch strikes on I.S. targets.