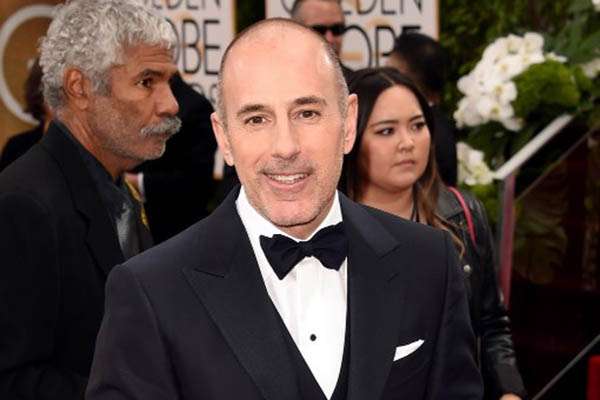 Star news anchor Matt Lauer has been sacked over allegations of sexual misconduct, U.S. broadcaster NBC said on Wednesday, in the latest fall from grace of a power player in the media and entertainment industry.

The 59-year-old, known to millions as host of morning show Today for more than 20 years, led coverage of numerous major news events, from the September 11, 2001, attacks to presidential campaigns and the Olympics.

Co-host Savannah Guthrie announced Lauer’s termination on air as their program began, calling it “a sad morning here at Today and at NBC News.” The network said it fired Lauer after receiving a detailed account from a colleague of what it called inappropriate sexual behavior on the job. But Hollywood trade weekly Variety published an investigation resulting from dozens of interviews with current and former colleagues over two months, suggesting it was part of a much larger pattern of behavior.

Instances of Lauer’s alleged misconduct detailed by the magazine included an occasion when he gave a mortified colleague a sex toy with an explicit note, and another in which he exposed himself in his office to another staffer. Three unidentified women had come forward, according to the report, with stories of Lauer’s sexual harassment that had been corroborated by friends or colleagues.

Citing a person with knowledge of the matter, the paper said one accuser said she was sexually assaulted by Lauer in his office in 2001. She passed out during the attack and had to be taken to a nurse, but did not report the incident because she felt ashamed and didn’t want to lose her job.

Lauer joins the ranks of numerous other film, TV and media giants brought down in a groundswell of outrage that began in October with a flood of sexual assault and harassment allegations against movie mogul Harvey Weinstein. The scandal has reached Washington, where several lawmakers stand accused of inappropriate behavior, and nearly every day seems to bring another stunning case involving a well-known public figure.

In a memo to staff, NBC chairman Andrew Lack said that on Monday night, the network received a detailed complaint accusing Lauer of inappropriate behavior. “It represented, after serious review, a clear violation of our company’s standards. As a result, we’ve decided to terminate his employment,” Lack wrote.

NBC said it was provided with evidence suggesting this may not have been an isolated incident.

Veteran journalist Katie Couric, who was Lauer’s co-host for years, said in 2012 during an interview with the showbiz gossip outlet TMZ that “Matt pinches me on the ass a lot,” although she laughed after making the remark.

Variety cited two of Lauer’s accusers who said the executive had a button under his desk that allowed him to lock his door from the inside without getting up, ensuring no one could walk in on him. According to multiple accounts the magazine said it had independently verified, Lauer would also invite female NBC employees to his hotel room late at night while covering the Olympics.

Variety, however, says several women had found their complaints to network executives falling on deaf ears.

President Donald Trump, himself accused of harassment by more than a dozen women, seized on the Lauer news. “Wow,” he said on Twitter, adding that executives at NBC and its parent company Comcast should be fired for “putting out so much Fake News.”

Trump was embarrassed in the final stretch of last year’s presidential campaign by the release of audio in which he is heard boasting that his fame allowed him to grab women’s genitals and get away with it. At the time, he acknowledged the veracity of the so-called Access Hollywood tape and apologized publicly. But he has since suggested that the voice on the tape was not his, the New York Times reported.

Lauer’s sacking comes a week after CBS fired Charlie Rose, one of America’s most respected TV journalists, after eight women told The Washington Post he had made unwanted sexual advances toward them. Rival television giant Fox News has long been rocked by allegations that its late former chairman Roger Ailes and ex-star presenter Bill O’Reilly, who was fired this year, settled multiple cases of sexual harassment brought by female colleagues.

Former Fox anchor Megyn Kelly, who has said she was sexually harassed at that network and now hosts an NBC show that airs right after Today, struck a firm tone in defense of harassment victims.

Kelly acknowledged the possible distress of Lauer’s colleagues over his sacking but added that “what we don’t see is the pain on the faces of those who found the courage to come forward, and it is a terrifying thing to do.”

National Public Radio, which already lost a senior executive earlier this month over sexual misconduct allegations, said its chief news editor, David Sweeney, had left the company after being accused of sexual harassment. And on an ignominious day for the media, writer and long-time radio host Garrison Keillor also saw his ties with Minnesota Public Radio severed over what it called inappropriate behavior with a co-worker.

The 75-year-old Keillor said in an email to the Minneapolis Star Tribune that he had inadvertently “put my hand on a woman’s bare back” and later offered an apology that was accepted.