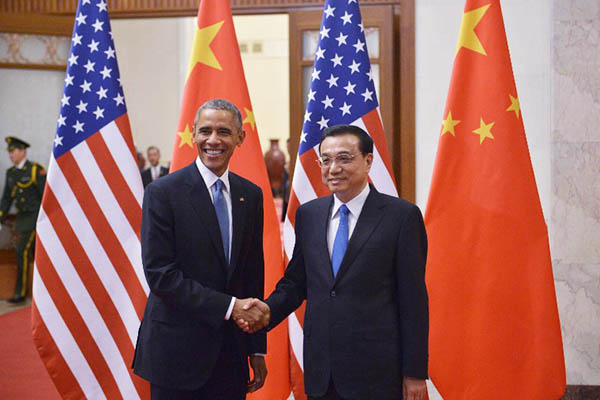 Washington plans to cut down emissions from 2005 levels by 2025, while Beijing has pledged to reach ‘peak output’ by 2030.

The United States and China on Wednesday announced an action plan on greenhouse emissions as part of a “historic” pact that was acclaimed by climate scientists but denounced by U.S. Republicans as a job-killer.

At a Beijing summit, the leaders of the world’s two biggest polluters put their stamp on attempts to breathe new life into action against global warming ahead of international talks in Paris next year.

U.S. President Barack Obama said the joint announcement on the two countries’ emissions targets was a “historic agreement” and a “major milestone in the U.S.-China relationship.” Chinese President Xi Jinping said: “We agreed to make sure that international climate change negotiations will reach an agreement in Paris.”

Attempts to deal with climate change, which scientists warn is approaching a potentially catastrophic point of no return, have long been stymied by the unwillingness of the United States and China to work together on the problem. But China set a target for its greenhouse gas output to peak “around 2030,” which Obama commended as an effort to “slow, peak and reverse the course” of its emissions. And Obama, who faces skepticism as well as outright denial about climate change in the U.S. Congress, set a goal for the United States to cut its own emissions of greenhouse gases by 26-28 percent from 2005 levels by 2025.

“We have a special responsibility to lead the worldwide effort against climate change,” Obama said at a joint news conference with Xi. “We hope to encourage all economies to be more ambitious,” he added.

China and the U.S., which together produce around 45 percent of the world’s carbon dioxide, will be key to ensuring a global deal on reducing emissions after 2020 is reached next year.

The two countries have long been at loggerheads over global targets, with each saying the other should bear more responsibility for cutting emissions of gases blamed for heating up the atmosphere. But after the 2009 Copenhagen Summit nearly ended in fiasco, salvaged only by a last-minute deal brokered by Obama and China’s then premier, Washington and Beijing have started to move closer towards agreement.

The World Resources Institute, a U.S.-based environmental group, hailed the Obama-Xi pact as a breakthrough. “It’s a new day to have the leaders of the U.S. and China stand shoulder-to-shoulder and make significant commitments to curb their country’s emissions,” the institute’s president Andrew Steer said in a statement. “They have both clearly acknowledged the mounting threat of climate change and the urgency of action,” he said.

But while it was the first time China agreed to a target date for emissions to peak—officials have previously only spoken of doing so “as soon as possible”—the commitment was qualified, leaving considerable room for maneuver.

China has trumpeted its efforts to reduce dependence on coal and oil in the past, and is the world’s largest hydropower producer, with a growing nuclear sector. But economic growth remains a vitally important priority and has seen demand for energy soar.

Much of Obama’s action on climate change meanwhile has been done with executive orders rather than cooperation from an often confrontational legislature. The deadline for Obama’s new pledge is in more than a decade’s time but he only has two years left in his presidency. He faces a Congress set to be controlled by opposition Republicans in both houses after this month’s mid-term elections, which will make passing environmental legislation even more difficult.

In an early portent of the battles to come, the U.S. Senate’s new Republican leader was quick to slam Obama’s proposed greenhouse gas reductions. “This unrealistic plan, that the president would dump on his successor, would ensure higher utility rates and far fewer jobs,” Senator Mitch McConnell said.

The European Union pledged last month to reduce emissions by at least 40 percent by 2030 compared with 1990 levels. But efforts to make meaningful progress on climate change will by stymied unless the U.S. sets “a concrete and ambitious” goal to reduce its greenhouse gas emissions, Connie Hedegaard, EU climate commissioner, said in October.

The EU accounts for 11 percent of the world’s greenhouse gas emissions, compared to 16 percent for the United States and 29 percent for China.