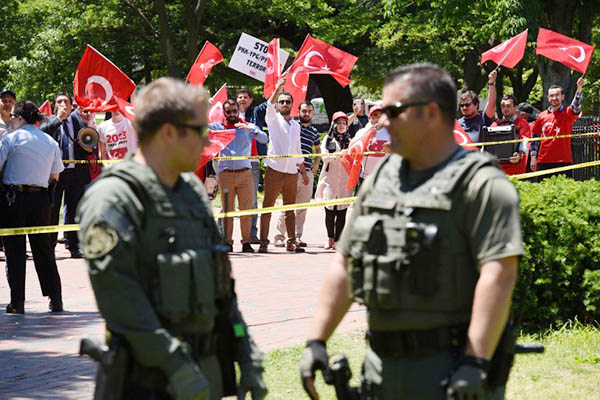 U.S. officials expressed outrage on Wednesday after a “brutal attack” on protesters by Turkish President Recep Tayyip Erdogan’s bodyguards cast a dark pall over his visit to Washington.

The Turkish leader on Tuesday negotiated what could have been a fraught White House encounter with President Donald Trump with some success but, as he pursued his Washington visit, chaos erupted. Under the eyes of shocked American passersby, a small group of pro-Kurdish protesters who gathered on the U.S. capital’s “Embassy Row” received a taste of the hardline tactics that Erdogan has adopted in his homeland to quell dissent.

Shortly before Erdogan was due to arrive at the Turkish ambassador’s residence, members of his notorious security detail pushed past U.S. police and assaulted the protest group.

Close-up footage shared on social media showed Turkish officials dressed in suits beating and punching people in the crowd and, in at least one case, kicking out at a woman splayed on the ground. Witnesses at the scene told AFP afterward that Erdogan’s men had provoked the clash, although there had also been violence in the crowd and that at least one pro-government protester had been hurt.

Washington police were initially overwhelmed but quickly drafted in reinforcements, quelling the fight and making two arrests, but not before 11 people including a U.S. officer were hurt. The attack was an embarrassment for U.S. authorities, who invited Erdogan to meet Trump despite concerns over his government’s increasingly authoritarian clampdown on his domestic media and opposition.

“Violence is never an appropriate response to free speech, and we support the rights of people everywhere to free expression and peaceful protest,” State Department spokeswoman Heather Nauert said. “We are communicating our concern to the Turkish government in the strongest possible terms.”

The State Department did not say whether any further action would be taken, but Washington, D.C. police said they were studying footage of the incident and trying to identify suspects. “Yesterday afternoon we witnessed what appeared to be a brutal attack on peaceful protesters outside the Turkish ambassador’s residence,” a police spokesman said. “The actions seen outside the Turkish Embassy in Washington D.C. stand in contrast to the First Amendment rights and principles we work tirelessly to protect every single day.”

The First Amendment to the U.S. Constitution protects the right to free expression.

Police said they had arrested two people for assault and identified them as U.S. residents, 49-year-old Ayten Necmi of New York and 42-year-old Jalal Kheirabadi of Virginia. Social media posts by the two suspects suggest that Necmi is a supporter of Erdogan who came to Washington to celebrate his visit whereas Kheirabadi is a supporter of Kurdish causes.

But the police said they are also working with the U.S. State Department and Secret Service “to identify and hold all suspects”—suggesting that they are seeking to interview Erdogan’s security detail.

Senior lawmaker Edward Royce, chairman of the House Foreign Affairs Committee, wrote to Secretary of State Rex Tillerson—who himself ignored a question about the brawl at a media photo opportunity.

“Alarmingly, this behavior is indicative of the broad crackdowns on political activists, journalists and religious freedom in Turkey that have greatly harmed Turkish democracy in recent years,” Royce wrote. “I ask that you immediately look into this matter and bring all appropriate charges before these individuals leave the United States.”

Erdogan’s party did not immediately respond to the allegations, but pro-government and state-run media in Turkey blamed the incident on supporters of the PKK and YPG Kurdish armed movements.

According to the Anadolu news agency, Erdogan’s guards were forced to intervene after U.S. police took “insufficient security measures” to prevent an illegal demonstration. The incident was very similar to another in Washington last year when Erdogan’s guards roughed up Kurdish protesters outside the Brookings Institution think tank just before the president arrived.