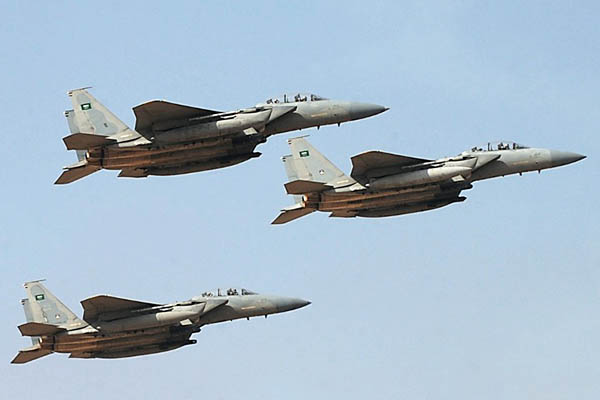 Over 19,000 smart bombs will be delivered to Gulf kingdom to replenish stocks depleted by airstrikes on Yemen.

The United States has approved a $1.29 billion deal to replenish the Saudi air force’s arsenal, depleted by its controversial bombing campaign against rebels in Yemen.

Congress has 30 days to block the sale but is unlikely to do so and shipment of the more than 19,000 smart bombs is urgent, with strikes continuing daily.

Oil-rich Saudi Arabia has long been one of the U.S. arms industry’s most avid customers, and the deal between the close allies is no surprise in the current climate. But it will not be uncontroversial. The Saudi-led campaign against Yemen’s Houthi Shia militia has been blamed for large-scale civilian casualties.

The United Nations estimates that 5,000 people have been killed in bombings carried out by Riyadh and its Sunni allies, many of them civilians.

Human rights watchdogs have accused the coalition of bombing carelessly, and last month Doctors Without Borders said one of its hospitals had been hit.

Last month, U.S.-based monitor Human Rights Watch demanded an inquiry into a large number of allegedly illegal strikes conducted since the campaign began in March. “Human Rights Watch has documented more than two dozen airstrikes that appeared to be in violation of the laws of war,” the group said.

The group added that it had “not been able to ascertain that Saudi Arabia or other coalition members are investigating a single airstrike.”

For its part, Saudi Arabia insists it takes care to avoid civilian casualties and has vowed to push a peace plan to resolve the conflict as quickly as possible.

Asked about whether the arms deal could be justified given Saudi Arabia’s record in bombing Yemen, State Department spokesman Mark Toner endorsed the peace process. “We have long held that that there can be no military solution to the conflict there,” he told reporters. “We call on the Houthis to cease harassing and attacking Saudi citizens and Saudi territory, and we support the U.N. process, therefore a peaceful resolution.”

Washington’s Saudi ally is also a key player in the U.S.-led coalition fighting the Islamic State jihadist group further north in Iraq and Syria. But its warplanes have been much more active over Yemen, flying with Emirati jets and supported by British ground engineers and U.S. logistics and intelligence.

The order includes 5,200 Paveway II laser-guided bombs in their GBU-10 and GBU-12 variants, along with 1,100 of the more modern, longer range GBU-24 Paveway III. There are 12,000 general purpose bombs weighing between 500 and 2,000 pounds and 1,500 devastating 2,000-pound “bunker busters,” the BLU-109 penetrator. These are designed to smash hardened concrete structures.

In addition to the bombs themselves, the Saudis will receive thousands of “tail kits” to convert dumb munitions into satellite-guided smart bombs. “The proposed sale augments Saudi Arabia’s capability to meet current and future threats from potential adversaries during combat operations,” the DSCA said. “Providing these defense articles supports Saudi Arabian defense missions and promotes stability in the region.”

Last month, the same agency approved an even bigger deal worth $11 billion for U.S. arms giant Lockheed Martin to sell Saudi Arabia four advanced warships. But those were expected to be deployed in the Gulf, on Saudi Arabia’s eastern flank, in part as a deterrent to its regional rival Iran not to pursue Yemeni rebels.

Is the us supporting the war in syria by arming Saudi Arabia.checks and balances are required.