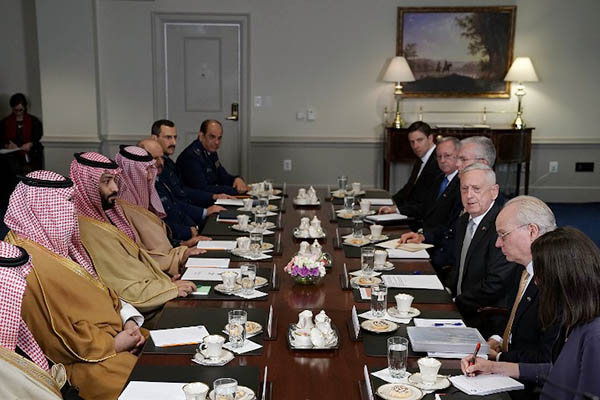 The State Department confirmed it had green-lighted a $670 million deal for anti-tank missiles, a $106 million contract for helicopter maintenance and $300 million for ground vehicle parts.

An official said the deals had been in the pipeline since President Donald Trump has announced more than $100 billion in possible new contracts on a visit to Riyadh last year. “This proposed sale will support U.S. foreign policy and national security objectives by improving the security of a friendly country,” the Defense Security Cooperation Agency said.

Western governments are under pressure from campaigners, including some U.S. lawmakers, to halt or limit arms sales to Saudi Arabia as its forces fight in Yemen’s brutal civil war. But the United States, France and Britain continue to pursue lucrative deals to sell and maintain equipment in the kingdom’s vast, high-tech arsenal—and Riyadh is an avid client.

In theory, the U.S. Congress could still block the latest deals announced Thursday, but on Tuesday the Senate voted down a bill to halt U.S. support for the Saudi intervention in Yemen. These contracts are therefore now expected to be nodded through after the State Department and Pentagon gave the go-ahead and Trump publicly celebrated the prospect of the sales.

Saudi Arabia’s young crown prince and de facto ruler Mohammed Bin Salman is part way through a three-week tour of America that has already taken him to friendly talks in Trump’s White House.

The largest of the three contracts is for 6,600 TOW 2B anti-tank missiles, made by U.S. giant Raytheon. The next biggest covers spare parts and maintenance for the Saudi ground forces’ pool of U.S.-built Abram tanks, Bradley fighting vehicles, LAV armored vehicles, howitzers and Humvees.