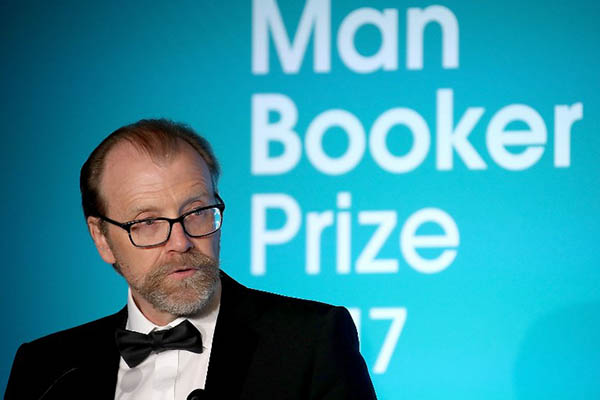 U.S. author George Saunders on Tuesday became only the second American writer to win Britain’s renowned Man Booker Prize, which was awarded for his first full-length novel Lincoln in the Bardo.

Judges for the world’s most prestigious English-language literary award praised as “utterly original” the book that chronicles the death of Abraham Lincoln’s 11-year-old son Willie using the accounts of hundreds of narrators.

“The form and style of this utterly original novel reveals a witty, intelligent, and deeply moving narrative,” said Lola Young, chair of the judging panel, in announcing the prize at a ceremony in London.

Saunders, 58, described the award as a “great honor, which I hope to live up to with the rest of my work, for the rest of my life.” In a brief, politically tinged acceptance speech, he made several thinly veiled references to the controversial policies of U.S. President Donald Trump.

“We live in a strange time,” he told the audience. “In the U.S. now we’re hearing a lot about the need to protect culture. Well, this tonight is culture.”

He later told reporters he was in disbelief and numb at the award. “For an artist, I think validation is really helpful,” he added. “My opinion of myself improves a little bit.”

The winner of the Man Booker receives £52,500, although the bigger prize is seen as a spike in sales, which invariably follow the announcement of the winner.

This year’s shortlist stoked controversy over its big name omissions and eclectic line up, with one British columnist calling it “baffling” and a leading U.S. critic decrying its “Americanization.” It pitted three nominees from the U.S. against two British writers and a British-Pakistani author.

The award, launched in 1969, was only open to novelists from Commonwealth states until it began permitting those from other English-speaking countries in 2014. Last year Paul Beatty became the first American to win for his novel, The Sellout.

Saunders was the British bookmakers’ favorite ahead of the 2017 announcement on Tuesday. He wrote Lincoln in the Bardo over a four-year period, after first conceptualizing it 20 years ago, the author told a press conference following the ceremony.

Saunders said he was unsure how exactly to tell the story at the outset, but relished the artistic freedom. “I think the true mastery [of storytelling] is to be willing to wade into something and not be sure how it’s going to turn out,” he added.

In a lengthy and varied writing career, Saunders has penned award-winning short story collections, essays, illustrated fables and a bestselling children’s book, as well as many pieces of journalism. In 2006, he was awarded both a Guggenheim Fellowship and a MacArthur Fellowship, while in 2009 he received an Academy Award from the American Academy of Arts and Letters.

To clinch the Man Booker Prize he beat competition from a varied selection of writers, including fellow American Paul Auster, who penned 4321.

The shortlist also included two other debut novelists—Emily Fridlund, who wrote History of Wolves, and Fiona Mozley, the 29-year-old British author of Elmet.

British author Ali Smith was shortlisted for the fourth time for Autumn, while Mohsin Hamid, a British-Pakistani writer, completed the line-up with his second shortlisted novel, Exit West.

The Man Booker’s five person judging panel only reached its decision at 2:40 p.m. on Tuesday afternoon, according to Young, the chair. She said the nationalities of the writers were not a factor, and the group were “very diligent, very thorough” in their considerations. “There were no fights, no blood on the carpet,” she said.