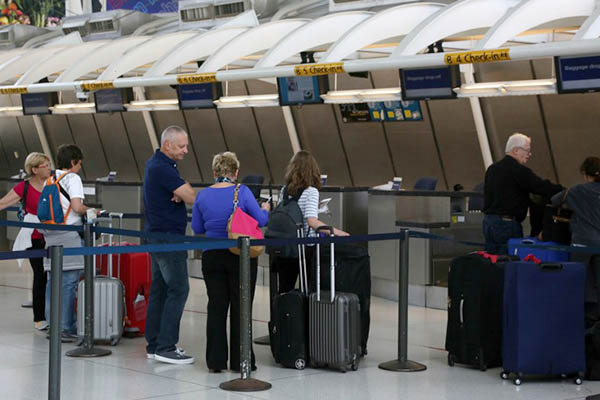 Several airlines have confirmed tougher controls at departure airports for nonstop flights to the U.S.

U.S.-bound travelers will face security interviews before checking in for flights at a number of global airlines beginning on Thursday as anti-terror measures are stepped up around the world.

Lufthansa, Emirates, Air France and Norwegian Air confirmed to AFP on Wednesday that U.S. authorities had asked for tougher controls at departure airports for non-stop flights to the United States. Other carriers issued statements also confirming the new measures. “In addition to the controls of electronic devices already introduced, travelers to the USA might now also face short interviews at check-in, document check or gate,” a Lufthansa spokesperson said. “The implementation will take place on Oct. 26. The security of our passengers and staff is our top priority.”

Emirates said passengers would be subjected to “pre-screening interviews at the check-in counter” whereas Air France said it expected to apply an additional “security interview.”

Cathay Pacific said it would halt services allowing passengers to check in luggage from downtown Hong Kong or curbside at the airport, and instead interview them at check-in gates.

The airlines suggested that passengers arrive early for their flights to account for any additional delays caused by the new rules. Norwegian said that its passengers would receive instructions by SMS message and that check-in desks would open four hours before departure for flights to the United States.

The U.S. Transportation Security Administration confirmed that a package of new security measures, including direct screening of passengers, more checks for personal electronic devices, and other measures, were being introduced.

Spokeswoman Lisa Martinez said the measures would affect around 2,100 daily flights to the United States from around the world. “These measures, both seen and unseen, include enhanced screening of passengers and electronic devices as well as heightened security standards for aircraft and airports,” she said.

But she would not confirm the specific use of check-in interviews.

The new measures came as President Donald Trump’s administration is working to toughen controls on refugees and immigrants amid worries that jihadist groups like Islamic State and Al Qaeda are both trying to send potential attackers into the United States and to smuggle bombs on board a U.S.-bound flight.

On Tuesday, Trump issued an executive order ending a moratorium on refugee arrivals but re-imposing controls on those coming from 11 countries, most of them with Muslim majorities. Previously, the administration has banned laptops and larger electronics from cabins on flights from certain Middle East hubs, and has attempted to impose a blanket visa ban on some countries—a measure now tied up in the courts.

The White House has insisted the new controls are designed as anti-terror safeguards but Trump’s critics have accused him of unfairly targeting Muslims with blanket measures.

Last week U.S. lawmakers from the House Homeland Security Committee visited airports in Europe and the Middle East to inspect security conditions and discuss counter-terror cooperation. “The timing of this visit to Europe and the Middle East was critical, as terrorists remain intent on taking down aircraft,” said Representative John Katko in a statement on Wednesday. “We must do all that we can to stay ahead of the evolving threat to the global aviation sector.”