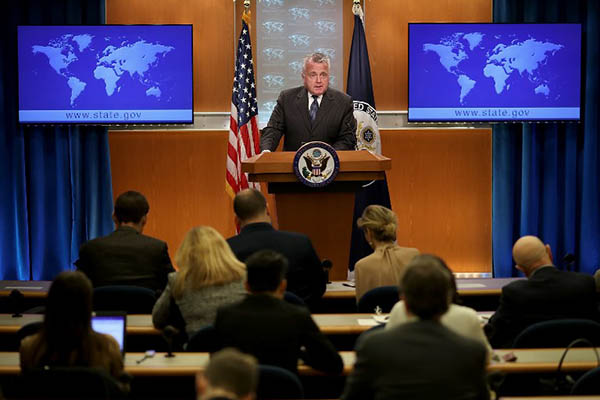 The United States branded strategic rivals China and Russia “forces of instability” on Friday, grouping them with Iran and North Korea as countries whose rights abuses amount to a global threat.

The charge was made by acting secretary of state John Sullivan as he launched Washington’s annual global human rights report, which this year is focused on destabilizing abuses by state actors.

Human rights groups were quick to criticize the report, noting that it had been stripped of much of the reporting on women’s and reproductive rights that it had contained in recent years. Instead, President Donald Trump’s administration has refocused the report on government-led crackdowns on a narrower range of human rights recognized under U.S. and international law. And Sullivan, in a preface to the report, underlined the importance of rights reporting for U.S. interests and security.

“Some governments are unable to maintain security and meet the basic needs of their people, while others are simply unwilling,” Sullivan wrote, introducing the country-by-country reporting. “States that restrict freedoms of expression and peaceful assembly; that allow and commit violence against members of religious, ethnic, and other minority groups; or that undermine the fundamental dignity of persons are morally reprehensible and undermine our interests,” he wrote. “The governments of China, Russia, Iran, and North Korea, for example, violate the human rights of those within their borders on a daily basis and are forces of instability as a result.”

Global watchdog Human Rights Watch was quick to criticize the report’s change of direction, lamenting the loss in coverage of “societal” limits on rights, in particular for women. “This year’s U.S. State Department human rights report guts the analysis of sexual and reproductive rights, reflecting the Trump administration’s hostility toward these issues,” the group’s Washington director Andrea Prasow told AFP. “In doing so, the administration is undermining a document that has long been relied upon by the Congress, foreign governments and activists alike to assess human rights conditions around the world. This is unfortunately only one facet of the administration’s efforts to downplay human rights as an element of U.S. foreign policy.”

One of the authors of the report, senior diplomat Ambassador Michael Kozak, acknowledged the report’s methodology on reporting reproductive rights had reverted to an earlier U.S. standard.

China, North Korea and Belarus are called out for various forms of coerced abortions and sterilizations, but access to abortions and contraception is not considered a universal right. “This is supposed to be internationally recognized human rights,” he said, emphasizing that the report was aimed at recording abuses by government policy not through “societal” issues.

Last year’s “Country Reports on Human Rights Practices” was prepared from research conducted by U.S. embassies around the world under the previous U.S. administration of president Barack Obama. Trump’s first secretary of state, Rex Tillerson, was much criticized for refusing to publicly present this earlier document himself, as his predecessors had traditionally done.

Tillerson has since been sacked, despite championing Trump’s “America First” agenda and warning that sometimes America’s interests trump its values when dealing with foreign powers. His nominated successor, CIA director and foreign policy hawk Mike Pompeo, has yet to be confirmed in office by the Senate but rights advocates have already raised the alarm about his views.

The former congressman has socially conservative views, was an opponent of gay marriage and refused to say during his confirmation hearing whether he considers homosexuality a “perversion.”

Trump, meanwhile, is an unlikely leader for a government that sees itself as a world leader on human rights. During his 2016 campaign for office, Trump repeatedly said he favored the torture of terror suspects by waterboarding “or much worse” and has endorsed the killing of the suspects’ families.

As president he has courted leaders like the Philippines’ President Rodrigo Duterte, despite what Friday’s report recorded as hundreds of extrajudicial killings in his war on drugs.

The annual Country Reports on Human Rights does not in itself trigger any compulsory U.S. action against alleged abusers, but serves as a background report for policy-makers. It is one of the most consulted documents on the State Department website and is often cited as evidence in congressional debates, asylum hearings and foreign policy discussions.