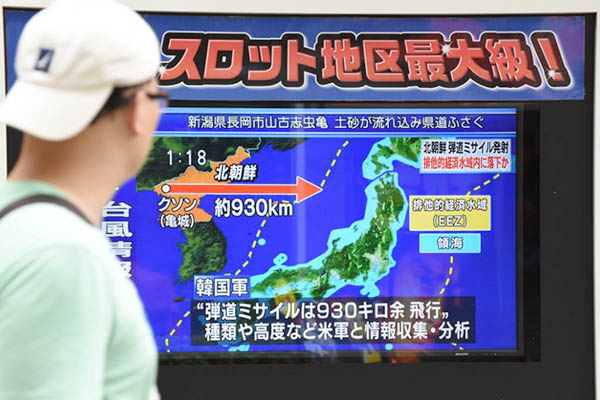 North Korea has test launched an intercontinental ballistic missile for the first time, the United States confirmed on Tuesday as it warned of an escalating threat from Pyongyang and insisted America would never accept a nuclear-armed North Korea.

The North’s possession of a working ICBM—something U.S. President Donald Trump had vowed “won’t happen”—represents a milestone for the reclusive communist regime as it pushes ahead with a weapons program it says it needs to ward off invasion. Some experts said such a missile could reach Alaska or go even further toward the U.S. mainland. But there was widespread skepticism of the North’s claim of the missile being able to “strike any place in the world.”

Pyongyang’s having such a weapon could radically alter the calculus for countries seeking to thwart the military goals of the isolated state.

North Korea’s official news agency announced that the ICBM is capable of carrying a “large, heavy nuclear warhead” that can survive re-entry into the Earth’s atmosphere. It quoted leader Kim, who personally oversaw the test, as having inspected the Hwasong-14 missile and “expressed satisfaction, saying it looked as handsome as a good-looking boy and was well made.”

The North’s Academy of Defense Science, which developed the missile, said it reached an altitude of 2,802 kilometers and flew 933 kilometers, calling it the “final gate to rounding off the state nuclear force.”

U.S. confirmation of the launch came in a statement from Secretary of State Rex Tillerson. “The United States strongly condemns North Korea’s launch of an intercontinental ballistic missile. Testing an ICBM represents a new escalation of the threat to the United States, our allies and partners, the region, and the world,” Tillerson said. He added: “As we, along with others, have made clear, we will never accept a nuclear-armed North Korea.”

The United States requested an emergency meeting of the U.N. Security Council, which is expected to take place on Wednesday. Russia and China issued a joint appeal to ease soaring tensions between the United States and North Korea. But that call was shrugged off by Washington and Seoul, which fired ballistic missiles simultaneously in a drill Wednesday simulating an attack on the North’s leadership, South Korea’s Joint Chiefs of Staff said, “as a strong message of warning.”

The live-fire training was held at the order of President Moon Jae-In, Yonhap news agency said, who backs engagement with Pyongyang to bring it to the negotiating table. “President Moon said North Korea’s serious provocation required us to react with more than just a statement and that we need to clearly show our missile defense readiness to North Korea,” it cited Seoul’s presidential Blue House as saying.

The missiles deployed in the drill feature “deep strike precision capability,” enabling the United States and South Korea “to engage the full array of time critical targets under all weather conditions,” the U.S. military said.

China and Russia called for a moratorium on further missile and nuclear tests by Pyongyang after a meeting between leaders Vladimir Putin and Xi Jinping in Moscow. They also called for a simultaneous suspension of large-scale U.S.-South Korea military exercises. “The opposing sides should start negotiations and affirm general principles of their relations including the non-use of force, rejection of aggression and peaceful coexistence,” the joint statement said.

Trump has been pinning his hopes on China—North Korea’s main diplomatic ally—to solve the crisis, but troubles have escalated since the U.S. leader took office in January.

There are still doubts whether the North can miniaturize a nuclear weapon to fit a missile nose cone, or if it has mastered the technology needed for it to survive re-entry into the Earth’s atmosphere. But since Kim came to power there have been advances including three nuclear tests and multiple rocket launches.

Following the launch, Trump asked on Twitter: “Does this guy have anything better to do with his life?”

The United Nations has imposed multiple sets of sanctions on Pyongyang, which claims that it needs nuclear arms to defend itself against the threat of invasion. The European Union said Tuesday that it might consider further sanctions against the North, having last month expanded a blacklist.

U.S. Pacific Command said the test involved a land-based, intermediate range missile that flew for 37 minutes before splashing down in the Sea of Japan.

Moscow’s defense ministry called it medium-range. But Tokyo—in whose exclusive economic zone it came down—estimated the maximum altitude to have “greatly exceeded” 2,500 kilometers, prompting arms control specialist Jeffrey Lewis to respond on Twitter: “That’s it. It’s an ICBM. An ICBM that can hit Anchorage not San Francisco, but still.”

David Wright, of the Union of Concerned Scientists, wrote on the organization’s allthingsnuclear blog that the available figures implied the missile had “a maximum range of roughly 6,700km on a standard trajectory.”

“That range would not be enough to reach the lower 48 states or the large islands of Hawaii, but would allow it to reach all of Alaska.”

Antoine Bondaz, an analyst at the Foundation for Strategic Research in Paris, said the launch was a “humiliation” for Trump after his repeated attempts to get China to rein in Pyongyang.

South Korea’s Moon warned the North against crossing “the bridge of no return.”

Washington, South Korea’s security guarantor, has more than 28,000 troops in the country. Fears of conflict peaked earlier this year as Trump’s administration suggested military action was an option.