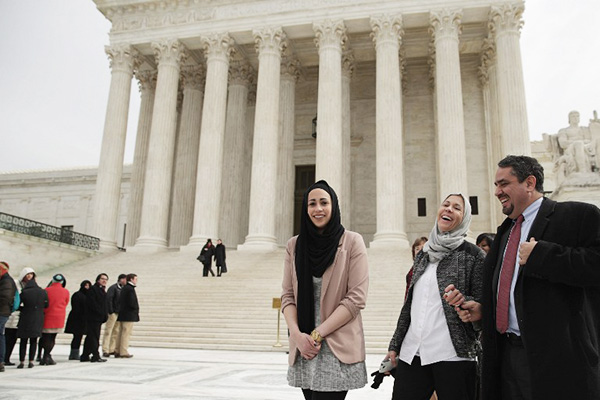 Supreme Court rules in favor of Samantha Elauf, establishing she was discriminated against due to the firm’s dress code.

The U.S. Supreme Court ruled Monday in favor of a Muslim woman who claimed she was denied a sales job with fashion retailers Abercrombie & Fitch as a teen because of her headscarf.

By an eight to one vote, the high court sided with the Equal Employment Opportunity Commission (EEOC), a federal government agency that sued Abercrombie on behalf of Samantha Elauf, on the grounds she was discriminated against because of the firm’s dress code. The court, in an opinion written by Justice Antonin Scalia, said Elauf only needed to show that her need for an accommodation was a motivating factor in the employer’s decision.

“An employer may not make an applicant’s religious practice, confirmed or otherwise, a factor in employment decisions,” the decision read.

Attorneys arguing Elauf’s case said she was protected by the 1964 Civil Rights Act, which bars anyone from being refused employment based on their religion, unless the employer cannot accommodate the person’s religious beliefs without adversely affecting business. Abercrombie argued that Elauf did not specifically request an exemption from the company’s dress code on religious grounds.

“Here, the employer at least suspected that the practice was a religious one,” Scalia said. “Its refusal to hire was therefore motivated by the desire to avoid accommodating that practice; and that is enough.”

But Abercrombie staunchly denied it had discriminated against Elauf’s religion. “A&F has a longstanding commitment to diversity and inclusion, and consistent with the law, has granted numerous religious accommodations when requested, including hijabs,” spokeswoman Carlene Benz said.

The clothing company is known for populating its stores with sales staff in somewhat racy attire. Its salespeople are required to conform to “Abercrombie style,” defined as a “classic East Coast collegiate style.” The company does not allow employees to wear “caps” of any kind or the color black, but scarves are not explicitly forbidden. Any departure from the dress code is regarded as grounds for disciplinary action, including dismissal, on the basis that it can negatively impact the company’s image, brand and sales.

But in April, with the winds seeming to change in Elauf’s case, the company announced plans to overhaul its image, making it less sexualized and more diverse. It also discarded its approach of referring internally to store associates as “models” and calling them instead “brand representatives.”

The government and numerous religious organizations have taken up the cause of the Muslim woman, who was 17 at the time of her 2008 job interview. “The decision by the Supreme Court today affirmed the basic right to practice one’s faith freely without fear of being denied the opportunity to pursue the American dream,” the Sikh Coalition’s senior staff attorney Gurjot Kaur said in a statement. “In the wake of this decision, all U.S. employers are unequivocally reminded that diversity and religious pluralism is at the heart of the American brand.”

Michael Droke of the law firm Dorsey & Whitney said the decision means employers should review their handbooks and policy manuals to identify which issues could cause discrimination. “This case dramatically changes the standards that apply to employers because it removes the requirement that an employee or applicant request a religious accommodation, if the employer’s motive is later deemed a violation,” he said.