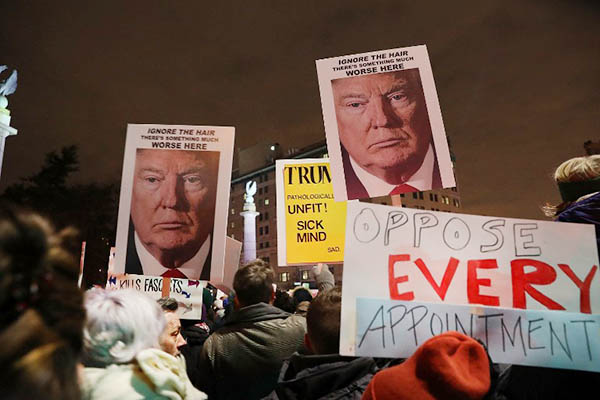 Senate Democrats say they will not approve Trump nominees that have conflicts of interest, little expertise.

“I hope soon our Senate Democrats will start working with us and not against us,” the Republican told Senate colleagues on Thursday.

Good luck with that.

Trump has moved at a blistering pace to fulfill various campaign promises, issuing a stream of executive orders warmly cheered by the Republican base. But he needs the Senate to confirm his cabinet picks, and Democrats furious over the controversial executive orders—not to mention his propensity to provoke longstanding U.S. allies—have hit the brakes.

Of the 15 people nominated to Trump’s all-important cabinet, only four have been confirmed. At this point in Barack Obama’s administration, 12 cabinet members were in place. By Feb. 2, 2001, all of George W. Bush’s lieutenants were on the job.

This year is different.

“These are not normal times, this is not a typical president,” Senate Democrat Chris Coons told reporters. “We’re in a difficult place.”

Anti-Trump demonstrators outside the U.S. Supreme Court this week had a blunt message for Democrats: “resist.” Lawmakers appeared to be listening.

“I’ve never seen a cabinet this full of bankers and billionaires, folks with massive conflicts of interest and such little experience or expertise in the areas they will oversee,” Schumer said on Thursday.

Angry Democrats have boycotted three nominees whom they have described as ethically flawed, refusing to show up for committee votes.

Republicans took the extraordinary step of changing committee rules in order to advance Trump’s nominees for U.S. Treasury, Department of Health and Human Services, and the Environmental Protection Agency, without participation by Democrats. The three are expected to get final Senate confirmation votes next week.

With partisan tensions soaring, Democrats were forced to contemplate another nomination, one that could have far-reaching impact on the nation: Trump’s pick to fill a vacancy on the U.S. Supreme Court. The choice of Judge Neil Gorsuch has triggered a sense of urgency among Democrats. They still bristle over last year’s refusal by Senate Republican leadership to consider Obama’s nominee to fill the vacancy following the death of conservative justice Antonin Scalia.

The seat has remained open for 11 months. Democrats are considering whether to fight tooth and nail to block Gorsuch’s confirmation, as several progressive groups have urged.

Senator Richard Blumenthal remains “deeply” troubled by how Republicans treated Obama’s nominee Merrick Garland, saying it led to the politicization of the high court. “But I’m not playing tit for tat,” Blumenthal stressed.

Indeed, his party must be wary of taking the same obstructionist tack as Republicans did in 2016. Waging war over a qualified nominee could alienate middle-of-the-road voters so crucial in 2018, when 10 Senate Democrats face re-election in states that Trump won.

A months-long battle is expected. If Republicans are unable to sway enough Democrats to confirm Gorsuch, they may employ the “nuclear option”: changing the rules to allow confirmation by a simple majority. “They can slow it down, but they can’t stop it,” Cornyn said of confirmations, as he accused the opposition of seeking to “undermine this new president” at every turn.

As Democrats dug in, a crack appeared in the Trump armor on Wednesday as two Senate Republicans announced they would oppose his education secretary nominee. Betsy DeVos, married to a billionaire heir to the Amway fortune, has faced intense criticism for her lack of education experience, and advocating the use of tax credits and vouchers to allow parents to opt out of the public school system.

If all Democrats and two Republicans oppose DeVos, her nomination would be deadlocked at 50-50, meaning Vice President Mike Pence, president of the Senate, would break the tie. “Is there not one more Republican senator who will stand with the American people against Betsy DeVos?” fiery Senator Bernie Sanders pleaded in a tweet.

That remained to be seen. A DeVos procedural vote occurs on Friday, while her full confirmation vote is expected on Monday.