U.S. Democrats Lash Out at Trump, Clash Over Terror in Debate 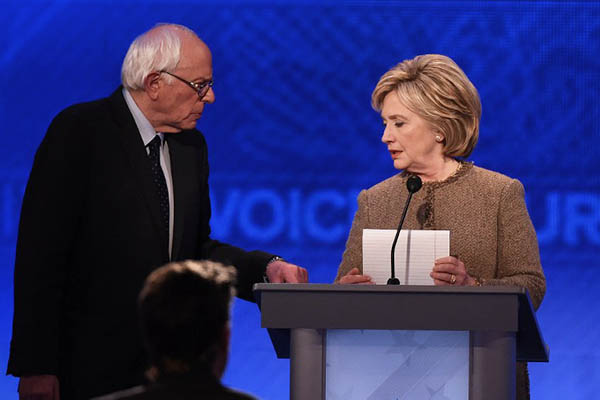 Hillary Clinton and other Democratic presidential hopefuls used Donald Trump as a political bogeyman on Saturday to highlight their own calls to defeat jihadist extremists without the bigotry and bluster brandished by their top Republican rival.

Former secretary of state Clinton, Senator Bernie Sanders and Maryland ex-governor Martin O’Malley each hit on the need to boost national security, raise the minimum wage and protect rights of women, minorities and the disadvantaged as they faced off in New Hampshire. But they had heated exchanges on the economy, guns, tackling the terrorist threat, and the role of the United States abroad.

With just over six weeks before the first votes are cast in the nomination race, on Feb. 1 in Iowa, Sanders and O’Malley are running out of time to blunt the momentum of the former top U.S. diplomat, who is 25 points ahead of rival Sanders in national polling compiled by RealClearPolitics.com. O’Malley trails them both badly.

It was their party’s third debate of the primary election season—the last of 2015 and their first since the attacks in San Bernardino, California, where a radicalized married couple killed 14 people. But the candidates also took turns hitting the Trump punching bag, as they hurled outrage about the Republican’s fear-mongering and recent controversial comments about immigrants—in particular, his call for a ban on Muslims entering the United States.

Americans, Clinton said, “need to make sure that the really discriminatory messages that Trump is sending around the world don’t fall on receptive ears.”

“He is becoming ISIS’s best recruiter,” Clinton said of the self-declared Islamic State, claiming that jihadists are “showing videos of Donald Trump insulting Islam and Muslims in order to recruit more radical jihadists.”

Trump fired back on that point, tweeting overnight that Clinton had “lied.” The New York Times was among several media outlets that found no proof to back up Clinton’s claim.

O’Malley also offered a harsh rebuke to the “political danger” wielded by Trump and other “unscrupulous leaders [who] try to turn us upon each other.” The country will rise to the challenge of I.S., but only if Americans never surrender their values “to the fascist pleas of billionaires with big mouths. We are a better country than this.”

Trump’s apparent popularity has only grown in recent weeks since his most contentious remarks. The political neophyte tops most Republican national polls and is putting establishment candidates like Jeb Bush in knots.

While the Democrats united against Trump, Sanders clashed at length with Clinton over how to tackle extremism, opposing her call for a no-fly zone over Syria and for focusing on ousting that country’s President Bashar al-Assad.

Sanders, who is more comfortable talking about economic inequality and financial abuse, topics that are the cornerstones of his campaign, was deeply skeptical. “The United States at the same time cannot successfully fight Assad and ISIS,” he said. “ISIS now is the major priority. Let’s get rid of Assad later.”

O’Malley pointedly looked back at how several U.S.-backed regime changes fomented chaos. He singled out Libya in 2011, when Clinton was the top U.S. diplomat and supported ousting Muammer Gaddafi, only to see the country descend into chaos, with large swaths now susceptible to becoming jihadist safe havens. “We probably let our lust for regime toppling get ahead of the practical considerations for stability in that region,” O’Malley said.

Clinton insisted she was not ready to send U.S. boots into Syria and Iraq, saying she had a strategy to “combat and defeat ISIS without getting us involved in another ground war.”

The debate unfolded amid a minor scandal between the Clinton and Sanders campaigns over an apparent data breach when at least one Sanders staffer took advantage of a computer glitch to peek at Clinton voter information.

But on stage Saturday, Sanders apologized to Clinton, saying “this is not the type of campaign that we run,” and the issue quickly deflated.

Data and I.T. are uncomfortable topics for Clinton, who was the center of an uproar after it was revealed she used a personal email account and server while secretary of state.

Republican National Committee chairman Reince Priebus lashed out at Clinton’s performance, saying she “once again proved inconsistent on the issues and out-of-touch with the American people.”

The debate occurred, perhaps not un-coincidentally, on a Saturday night at the height of the Christmas shopping rush, and on the first weekend of the release of the latest highly anticipated Star Wars movie, likely ensuring a downsized viewership compared to previous debates. Clinton wrapped up the event with a nod to the flick: “Thank you, good night, and may the Force be with you.”