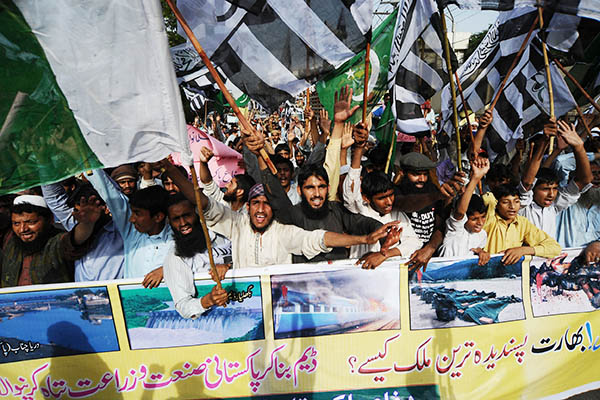 Jamaat-ud-Dawah supporters demonstrate against the U.S. and India, 2012. Arif Ali—AFP

The United States on Wednesday designated the finance chief and a senior public relations official of Pakistan-based militant group Lashkar-e-Taiba as “global terrorists,” placing tight economic sanctions on the two.

The U.S. Treasury said Nazir Ahmad Chaudhry, one of the two hit with sanctions, has been a senior leader and strategist for LeT since the early 2000s, while the second, Muhammad Hussein Gill, is an LeT founder and its chief financial officer.

Both were labeled “specially designated global terrorists,” freezing any assets they might have in U.S. jurisdiction and banning Americans from any transactions with the two.

“We will continue to target LeT’s financial foundation to disrupt and impede its violent activities,” said David Cohen, under secretary for terrorism and financial intelligence.

Also on Wednesday, the U.S. State Department amended the terrorist designation of LeT, adding Jamat-ud-Dawah, Al-Anfal Trust, Tehrik-e-Hurmat-e-Rasool, and Tehrik-e-Tahafuz Qibla Awwal as known aliases of the group. Jamat-ud-Dawah is often cited as the “charity” arm of the LeT and openly operates throughout Pakistan.

LeT, already officially named a “foreign terrorist organization” by the U.S. government, has carried out attacks on India and Indian forces in Indian-administered Kashmir since the early 1990s. It was blamed for the 2008 attacks in Mumbai that left 166 people dead. The group has denied responsibility.

More recently, LeT was blamed for an attack last month on an Indian diplomatic mission in Herat, Afghanistan that left two policemen wounded. But the group subsequently denied involvement in that attack.