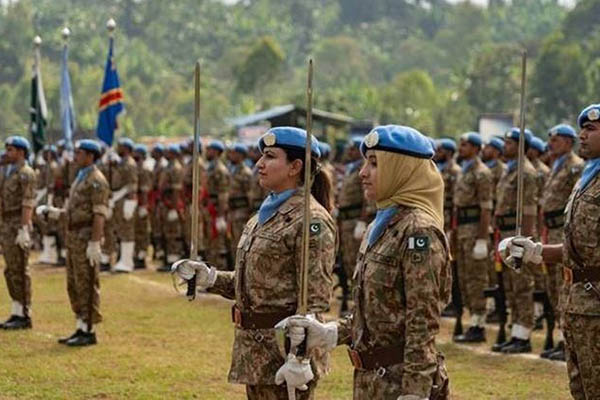 U.S. Principal Deputy Assistant Secretary of State for South and Central Asian Affairs Alice Wells on Wednesday praised Pakistani women serving as peacemakers with the United Nations, saying she was “inspired” by them.

In a posting on Twitter, the U.S. diplomat lauded Pakistani women for “serving with distinction” in the U.N. peacekeeping mission in the Democratic Republic of Congo. “The first Pakistani all-female group of 15 peacekeepers received medals last week for their work performing a range of services to the conflict-affected eastern DRC,” she said, alongside a photo of Pakistani peacekeepers.

Last week, members of the first-ever Pakistani Female Engagement Team deployed with the United Nations Organization Stabilization Mission in the Democratic Republic of Congo were awarded the U.N. Medal at a ceremony in Adikivu in South Kivu province of the Congo. Comprising 15 women officers with the ranks of Major and Captain, the team was stationed in the DRC last year, an occasion that was marked with the raising of Pakistan’s flag at the mission.

In a separate press release, the mission in the DRC said that 17 women would join the team later this month. “This team’s extraordinary endeavors to serve the U.N. is worthy of praise,” added the statement.

According to the U.N., Pakistani troops are currently serving in seven U.N. operations, with the majority deployed in the DRC, Darfur and the Central African Republic.