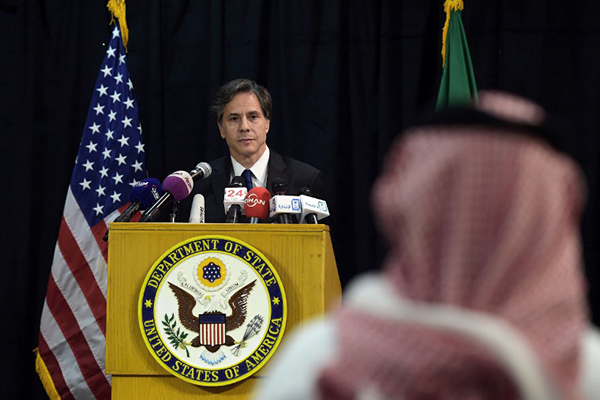 American official says the new weapons will help send a message to Houthi rebels that they cannot overrun Yemen by force.

The United States has stepped up weapons deliveries in support of a Saudi-led coalition resisting the advance of Shia rebels in Yemen, a senior U.S. official said Tuesday.

“Saudi Arabia is sending a strong message to the Houthis and their allies that they cannot overrun Yemen by force,” Deputy Secretary of State Antony Blinken told reporters in the Saudi capital. “In support of that effort we have expedited weapons deliveries,” he said after talks with Defense Minister Mohammed bin Salman and other Saudi officials. “We’ve increased our intelligence sharing, and we’ve established a joint coordination planning cell in the Saudi operations center.”

A U.S. defense official told AFP that Washington was sending primarily precision-guided munitions to the United Arab Emirates, which was then delivering the bombs to Gulf partners. That approach was taken because the U.A.E. already had a contract with the U.S. government for the munitions and Washington was simply expediting the delivery of the weapons, said the official, who spoke on condition of anonymity.

The shipments of bombs to the Saudi-led coalition were part of the U.S. commitment to provide intelligence and logistical assistance to the air campaign, Pentagon officials said. “It’s a combination of pre-existing orders made by partner nations and some new requirements as they expend munitions,” spokesman Colonel Steven Warren told reporters in Washington.

The Saudi-led coalition on March 26 began airstrikes in Yemen, aiming to defeat the Houthi rebels who seized power in the capital Sanaa in February, and who Riyadh feared would take over the entire country and shift it into the orbit of Shia Iran, Sunni Saudi Arabia’s regional rival.

The Houthis, allied with army units loyal to ex-president Ali Abdullah Saleh, have been fighting forces loyal to President Abedrabbo Mansour Hadi, who fled to the Saudi capital Riyadh late last month from the port city of Aden.

Blinken said Hadi’s opponents “have brought Yemen to the brink of economic collapse” and demolished government institutions in a country, which had been “on a very positive path to an inclusive future.”

Al Qaeda and other groups were seeking to exploit the resulting instability, he said. “These security threats extend beyond Yemen to the region and indeed to the entire world.”

Blinken, who is on a Middle East tour, met with Hadi during his Riyadh stop.

The U.S. official said it “is more important than ever” that the U.S. and the Gulf Cooperation Council states, which include Saudi Arabia, coordinate closely and press all parties especially the Houthis and their allies “to commit to a consensus political solution.”

Blinken also offered reassurances that a framework agreement reached last week to curb Iran’s nuclear drive would make the Gulf safer. “Iran without a nuclear weapon will be less emboldened to take destabilizing activities in the region.

“We will reduce the pressure for a regional arms race… this agreement is a critical step in ensuring greater security in the Gulf,” he said.

The deal marked a major breakthrough in a 12-year standoff between Iran and the West, which has long feared Tehran wants to build an atomic bomb, despite Iran’s denials.

Saudi Arabia worries that if too much of Iran’s nuclear program is left intact it will still have the ability to obtain an atomic bomb, and there have been concerns that Riyadh could seek its own nuclear capability.