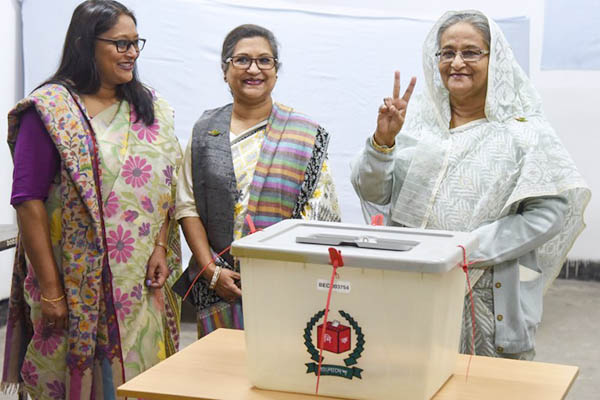 The United States on Tuesday expressed concern about “credible reports of harassment, intimidation and violence” in the weeks before Sunday’s parliamentary election in Bangladesh.

A State Department statement urged the country’s Election Commission to “work constructively with all sides to address claims of irregularities.” But it offered its congratulations to “the tens of millions of Bangladeshis who voted” and said the U.S. “remains deeply invested in the future of Bangladesh and its democratic development.”

“The United States is Bangladesh’s largest foreign investor, largest single-country market for Bangladeshi exports, and home to a large community of Americans of Bangladeshi origin,” it noted. The statement added: “Bangladesh’s impressive record of economic development and respect for democracy and human rights are mutually reinforcing, and we look forward to continue working with the ruling government and opposition towards advancing these interrelated goals.”

The European Union similarly called on Bangladesh on Tuesday to probe the violence and “significant obstacles” that it said had “tainted” both the campaign and the vote.

On Monday, Prime Minister Sheikh Hasina was declared the landslide winner in her bid for a fourth term. The election was marred by violence—at least 17 people died—and the opposition slammed it as “farcical” and rigged, amid allegations of intimidation and ballot-box stuffing. But Chief Election Commissioner K.M. Nurul Huda said there was “no scope” to hold a new election, and Hasina herself rejected calls for a new vote, saying, “I have nothing to hide… My conscience is clear.”

Hasina’s Awami League party extended its grip on power by winning an unprecedented 98 percent of seats, nearly eliminating the opposition presence in parliament and raising fears, analysts said, about the future of democracy.