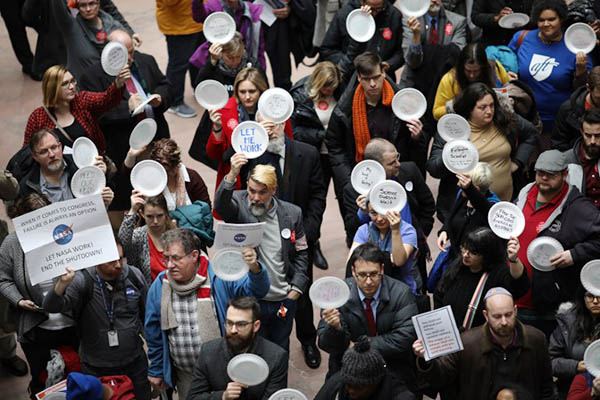 Several hundred U.S. federal employees who have not been paid in weeks due to the partial government shutdown protested against the impasse on Wednesday in Washington.

They peacefully occupied a U.S. congressional office building for several hours, responding to the call of several unions and organizations representing government employees and contractors.

The employees protested silently for 32 minutes, symbolizing the duration in days of the shutdown sparked by a dispute over funding for President Donald Trump’s border wall project, which he has demanded and Democrats have declined to provide. Some held posters or paper plates with messages including “Will work for pay” and “Do your job—so Americans can do theirs.”

While government employees are to be paid retroactively, the same is not true for contractors. “It’s been five weeks now and I only worked one or two days, my company called me for special events,” said Claudia Martinez, who works for a catering company that has a contract with the U.S. House of Representatives cafeteria. She has a second job with a tourism company, but “January is very slow.”

“This month will be very difficult,” said the 43-year-old mother, who has to pay $400 per month for her child’s student loan.

“The shutdown affects this whole country,” said Francis Nichols, an official in the American Federation of Government Employees union. “I heard many people say what bill I should we pay first,” he said, while others have to choose between paying bills or fueling their cars to come to work.

The standoff between Trump and opposition Democrats over border wall funding has seen some 800,000 federal employees to go without pay. The Senate is to consider two competing bills to end the shutdown on Thursday, but the chances are slim that either will reopen federal agencies.