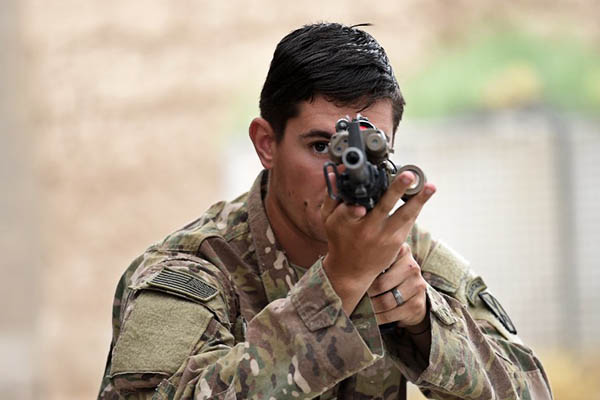 From his watchtower in insurgency-wracked eastern Afghanistan, U.S. army Specialist Josh Whitten doesn’t have much to say about his Afghan colleagues. “They don’t come up here anymore, because they used to mess around with our stuff.”

Welcome to Forward Operating Base Connelly, where U.S. troops are providing training and tactical advice to the 201st Afghan army corps as they take on the Taliban on the battlefield. For seven months after the formal end of the NATO combat operation in Afghanistan, U.S. forces have guided their counterparts from the sidelines with a mixture of pride, bewilderment—and suspicion.

The latter is clearly evident in the layout of this temporary base in Nangarhar province, where a snaking barbed-wire fence separates the armies of the two nations. For “Operation Iron Triangle”, which concluded on Saturday, U.S. forces kept very much to themselves—with a squad of guard dogs and a 7.62 Caliber machine-gun at the entry point reinforcing a simple message to Afghan forces: do not enter.

Whitten chews his tobacco and spits. “Sometimes they shoot in the air, we don’t really know what for,” he says, in a sign of the mistrust that permeates U.S. forces after years of “insider attacks”, including the killing of General Harold Greene by a radicalized Afghan soldier a year ago.

Twice a day, a dozen military advisers would go with heavily armed escorts to the Afghan side to provide their views on how best to “clean up” three districts near the Pakistani border of all traces of Taliban resistance. The 2,000 Afghan soldiers, police and intelligence agents involved in Iron Triangle were tasked with cornering the Taliban in the Hisarak district, west of the base.

The Taliban, facing a period of uncertainty following the controversial appointment of their new chief Mullah Akhtar Mansoor, have recently stepped up their bombing campaign in the capital Kabul. In eastern Afghanistan their guerilla war shows no sign of letting up, and militants are now taking refuge across the border in Pakistan, claimed General Mohammad Zaman Waziri, commander of the Afghan regional forces.

“The enemy comes from Pakistan,” he said, echoing the words of President Ashraf Ghani who last week accused the neighbor of sending “messages of war” to Afghanistan.

Pakistan, which was one of three countries to recognize the Taliban’s 1996-2001 government, is often accused of supporting the militants’ insurgency for its own strategic purposes, a charge it denies.

Since the end of December, 13,000 foreign troops deployed in the country have been mainly limited to training local forces. “A lot of it is just sharing ‘This is how we do it.’ I don’t care if they do it our way, we just give them recommendations,” explained Major Edward Bankston, head of the U.S. advisers at the base.

Lieutenant Ellyn Grosz, who assists Afghan Major Rassoul, head of air support, at the Iron Triangle headquarters, has a more positive view of the training, saying it transformed coordination between air and ground forces. “It’s a huge success, before that they would do a gun run [aerial bombardment], land, and ask ‘so how did I do?’,” she said enthusiastically.

Still, the grey-bearded Major Rassoul, who earned his wings at the helm of a helicopter fighting Soviet forces in the 1980s, says he is under no illusions about the task ahead. “In the Eighties, we had new gear. These days we don’t have enough new equipment against the Taliban,” he said.

Equipment has been a key issue for the Afghan army since the end of the Taliban regime in 2001. One Afghan officer, who asked to remain anonymous, said one issue was that Afghan troops were not maintaining their weapons properly.

“For instance, I clean my weapon, my M16 every morning, but here, nobody does that and the maintenance is very poor,” he said.

And on the ground, the Afghan army is recording huge losses. Between the start of January and end of July, it lost 4,302 soldiers, against 3,337 in the same period last year, according to NATO.

Operation Iron Triangle was successful in its objective of “cleansing” the three districts near the Pakistani border of all enemy forces and even led to the discovery of 150 improvised explosive devices, according to the Afghan officer.

Colonel JB Vowell, who heads the U.S. advisers, said the Afghan forces had absorbed well their lessons in the fields of artillery, aviation, and intelligence. But, he cautioned, any gains would only be sustainable with a long-term political solution to meet residents’ needs. “Success here will be defined if governments and district government can reach people more, and security will follow.”