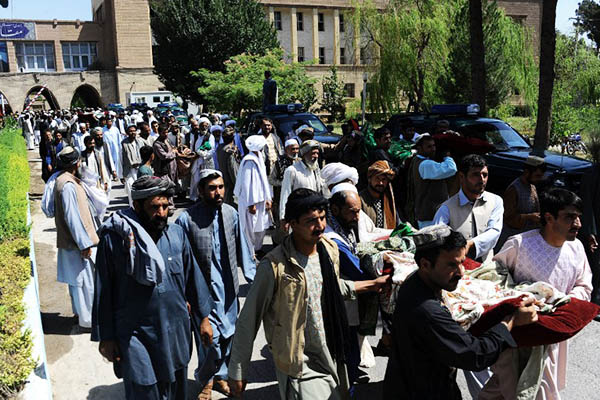 A U.S. airstrike killed up to 10 Afghan soldiers Monday at an army checkpoint in a Taliban-infested province south of Kabul, one of the deadliest episodes of “friendly fire” from foreign forces in recent years.

The early morning raid in the Baraki Barak district of Logar province comes as coalition forces increase airstrikes on potential militant targets despite a drawdown of NATO forces after 13 years of war.

The bombing marked the second such incident in the area since last December when a NATO airstrike killed five civilians and wounded six others. “At 6:00 a.m. today, two U.S. helicopters attacked a checkpoint in Baraki Barak,” said district governor Mohammad Rahim Amin. “The checkpoint caught fire… and 10 Afghan army soldiers were killed,” he added.

Civilian and military deaths in coalition airstrikes have been one of the most emotive and high profile issues of the war, often provoking fury from the government.

Logar’s deputy police chief Mohammad Wara said 10 Afghan soldiers were killed and four others were wounded but provincial army commander Abdul Razid Safi said the attack resulted in eight fatalities. American officials offered their “deepest condolences” over the accident and put the death toll at seven. “We have initiated an investigation of this incident,” U.S. military spokesman Wilson Shoffner said in a statement. “Alongside our Afghan partners, we will complete a joint investigation in a transparent, timely and thorough manner.”

“The Afghan flag was waving at the checkpoint in Baraki Barak when the Americans launched their attack,” he said.

But the Afghan defense ministry said “armed insurgents had opened fire on the coalition forces’ helicopters”, though it did not say if that had prompted the friendly fire.

Following the attack, an Afghan army convoy dispatched to the site was ambushed several times on its way by Taliban militants, but they managed to retrieve the dead without any further casualties, Amin said.

U.S.-led NATO forces ended their combat mission in Afghanistan in December, leaving local forces to battle the Taliban alone, but a 13,000-strong residual force remains for training and counter-terrorism operations.

Despite the drawdown, coalition forces carried out 106 military airstrikes in June, a sharp jump compared to the previous month when it carried out 41 strikes. But that figure is still significantly lower than previous years.

Last year they carried out 2,363 airstrikes compared to a total of 305 raids in the first six months of this year, according to coalition military statistics. Monday’s incident comes as Taliban insurgents step up attacks on government and foreign targets during their summer offensive despite official efforts to jumpstart peace talks.

While “friendly fire” incidents involving foreign coalition forces are a deeply contentious issue in Afghanistan, U.N. statistics show that the Taliban are responsible for most deaths. Civilians often fall victim to insurgent attacks, with almost 1,000 Afghan civilians killed during the first four months of the year, according to the U.N. mission in Afghanistan.

Ghani’s government has drawn criticism for failing to end growing insurgent attacks, which critics partly blame on the protracted delay in the appointment of a defense minister. The crucial post has not been filled since Ghani came to power last September.

Foreign forces are themselves also known to sometimes fall victim to “friendly fire” incidents. A NATO airstrike in June last year killed five U.S. troops and an Afghan soldier in an accident during clashes with insurgents.

The incident could have been avoided if American forces had communicated properly and understood their aircraft’s capabilities, military investigators later said.