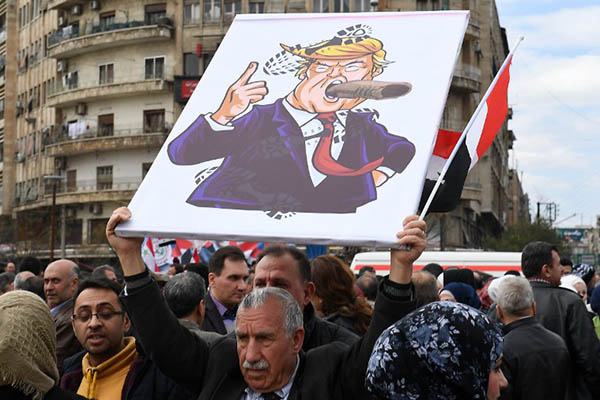 Syrians protest in Aleppo against the U.S.’ decision to recognize Israel’s sovereignty over the Golan Heights. George Ourfalian—AFP

The U.S. move on the Golan has left fractious Arab nations scrambling for a united response to a decision taken by a key ally, which may only end up benefiting Iran, analysts said.

Angry reactions have poured in from Arab capitals after U.S. President Donald Trump on Monday formally announced U.S. recognition of Israel’s sovereignty over the Golan Heights. But the seemingly united front is only a veneer masking the deep dilemma for Arab governments left trying to deal with Washington’s “fait accompli,” analysts said.

Those Arab states who are “allies of the United States are the most embarrassed because they have gone to great lengths to get closer to Donald Trump,” said Karim Bitar, senior fellow at the Paris-based Institute for International and Strategic Affairs. Some Arab countries, including regional powerhouse and Iran foe Saudi Arabia, have been cozying up to Washington, hoping to influence a long-awaited Middle East peace plan due to be presented in the coming months.

But with the Trump administration shredding long-accepted regional conventions, Arab allies are left in an increasingly humiliating position.

“It is rather Iran and its allies who feel comfortable in the idea that nothing can be expected from this American administration,” added Bitar. Indeed Iranian President Hassan Rouhani on Tuesday denounced Trump’s move as tantamount to “colonialism” something that is “unprecedented in the present century.”

With Arab states long fractured, Tehran has increasingly sought to spread its influence in the region. While most Arab governments have shunned Syrian President Bashar al-Assad over the country’s devastating civil war, Tehran has been a steadfast ally helping the regime now gain the upper hand as the conflict enters its ninth year. And in Yemen it is supporting Houthi rebels fighting a Saudi-led military coalition, which is backing the country’s beleaguered government.

Trump’s decision could be seen as a “God-send” for Iran which will “try to capitalize on the U.S.-Israeli move to try to fill the void of official Arab leadership” in the region, said Fawaz Gerges, an international relations expert at the London School of Economics.

Israel seized the Golan Heights from Syria during the 1967 Arab-Israeli war, and annexed it in 1981, in a move that was never recognized by the international community. It has always been assumed that the fate of the strategic plateau would be negotiated as part of a wider peace deal between Israel and Syria.

The Arab League, due to hold its annual summit in Tunis on Sunday, slammed Trump’s announcement as “null and void in substance and form.”

Arab governments including Saudi Arabia, Iraq, Kuwait, Jordan and Lebanon have all condemned the U.S. move. But while they have been left fuming by Trump’s casual short-circuiting of the accepted precepts of a future Middle East peace, they are powerless to take any meaningful action.

“Official Arab condemnation does not carry much weight. The Arab state system is dysfunctional and even broken,” said Gerges.

Rubbing salt into the wounds, Trump’s Golan move comes hot on the heels of his earlier incendiary decision, breaking with the decades-long status quo to recognize Jerusalem as the capital of Israel last year. Perhaps worryingly for the Palestinians, who claim east Jerusalem as the capital of their promised future state, the U.S. decision to move its embassy from Tel Aviv to Jerusalem has sparked vows from other countries to follow suit.

The Palestinians have broken off contact with the U.S. administration, and Palestinian Authority Mahmoud Abbas has railed that Washington has forfeited its historic role as a mediator in the conflict.

Arab countries, which have long fought for the Palestinian cause, “have been reduced to extreme fragility and none of them will go to war for Syria,” said political sociology professor Said Sadeq.

Saudi Arabia has even been quietly cooperating with Washington on the Israeli-Palestinian issue. Saudi Crown Prince Mohammed bin Salman “encouraged the Trump administration to think that core issues of international law and Arab sensitivity like Jerusalem and Syrian territory could be ridden roughshod over,” said Neil Partrick, Gulf specialist and author.

But the plan being drawn up by Trump’s son-in-law Jared Kushner appears unlikely to win much Arab approval. Bitar slammed the Kushner plan as “smokescreen or a vast humbug” saying the recognition of the Golan serves as a “nail in the coffin” of this plan. “Trump’s decisions on Jerusalem and the Golan Heights ensure that Israel will be in a state of perpetual war with its Arab-speaking people neighbors,” added Gerges. “The Israeli-Arab peace process is dead.”