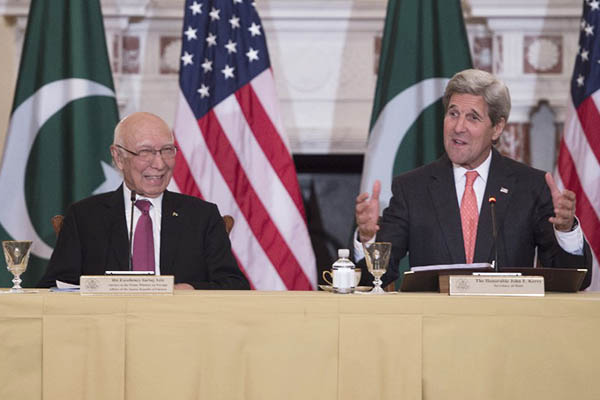 U.S. Secretary of State John Kerry kicked off a round of strategic talks with Pakistan on Monday by hailing a documentary film credited with changing attitudes to so-called “honor killings.”

A Girl in the River: The Price of Forgiveness won the Academy Award for best documentary short Sunday at the Oscars ceremony, and was on Kerry’s mind as he opened the annual U.S.-Pakistan Strategic Dialogue. Welcoming Pakistani Foreign Affairs Adviser Sartaj Aziz to the State Department for what he said would be “frank and very important talks” on development, nuclear arms and security, the top U.S. diplomat turned to the movie.

“This film told the remarkable story of a very courageous young woman who survived an attempt at an honor killing by her father and her uncle,” Kerry told the assembled diplomats from both countries. “And yet even more remarkable was that after the initial screening Prime Minister Sharif pledged to change laws that allow such barbaric practices and murders,” he added. “And that is a sign of how a great work of cinema can shine light on a subject on real world challenges and it can actually promote positive change.”

Director Sharmeen Obaid-Chinoy met Prime Minister Nawaz Sharif recently after the film screened in the country, which has been plagued by violent religious extremism. The film follows 19-year-old Saba, who was beaten, shot, dumped in a burlap sack and thrown into a river to be left for dead after she attempted to escape her family and marry a man.

Under a controversial interpretation of part of Islamic law in force in Pakistan, men who kill female relatives escape punishment if their relatives buy their pardons through blood money.

After meeting 37-year-old filmmaker Chinoy in Islamabad, Sharif issued a statement vowing to “rid Pakistan of this evil by bringing in appropriate legislation.”

After their opening remarks, the officials went into a closed session to discuss cooperation in the energy sector, the fight against Islamist extremist groups and nuclear safety and non-proliferation in the light of Pakistan’s tense relations with India.