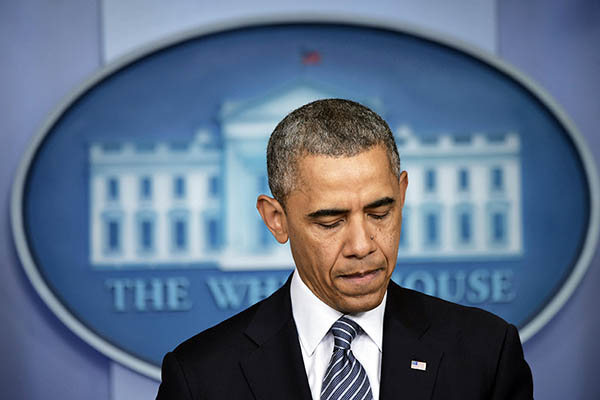 In interview, U.S. president has called for new drive to eradicate the militant group.

The United States has halted the course of the Islamic State group, President Barack Obama said in remarks broadcast on Friday, calling for a stepped up drive to “completely decapitate” the militants’ operations.

The ABC News interview was recorded on Thursday at the White House, hours after the start of a major operation by Iraqi Kurdish forces, backed by U.S.-led strikes, to drive I.S. out of the northern town of Sinjar.

“I don’t think they’re gaining strength,” said Obama. “From the start, our goal has been first to contain, and we have contained them. They have not gained ground in Iraq. And in Syria—they’ll come in, they’ll leave. But you don’t see this systematic march by ISIL across the terrain,” he said.

Obama gave the interview before news broke of a U.S. airstrike in Syria targeting “Jihadi John,” a masked British militant who appeared in a string of graphic execution videos.

I.S. has seized large chunks of territory in Iraq and Syria. “What we have not yet been able to do is to completely decapitate their command and control structures. We’ve made some progress in trying to reduce the flow of foreign fighters,” Obama said. “Part of our goal has to be to recruit more effective Sunni partners in Iraq to really go on offense rather than simply engage in defense.”

The president warned that regional strife would persist “until we get the Syria political situation resolved.”

“Until Assad is no longer a lightning rod for Sunnis in Syria and that entire region is no longer a proxy war for Shia-Sunni conflict, we’re going to continue to have problems,” he said. “I would distinguish between making sure that the place is perfect—that’s not going to happen anytime soon—with making sure that ISIL continues to shrink in its scope of operations until it no longer poses the kind of threat that it does.”