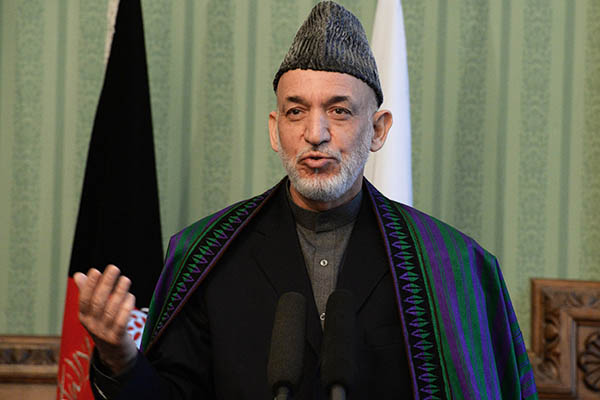 The United States expressed hope on Tuesday that India would persuade Afghan President Hamid Karzai to sign a deal allowing U.S. troops to stay past the 2014 withdrawal deadline, as lawmakers voiced outrage at the delay.

Testifying before a Senate committee, a senior U.S. official voiced confidence that Afghanistan would eventually complete an agreement for some 12,000 U.S. troops to stay after 2014, despite Karzai’s insistence that he will leave the decision to his successor. “His upcoming visit to India could, I think, be quite influential, because he highly respects and has good relations with the Indian government,” said James Dobbins, the U.S. special representative on Afghanistan and Pakistan. Karzai visits India later this week.

Dobbins said that all regional powers—except Iran—had encouraged Karzai to sign the accord, which would authorize U.S. troops to keep training Afghans after next year’s official withdrawal of combat forces.

“Several of these leaders are no fans of an American military presence in Central Asia, but all recognize that without continued international military and economic support, Afghanistan risks falling back into civil war,” Dobbins said. Such a war would lead to a “rise in extremist groups, outflow of refugees and disruptions in commerce that would threaten the region as a whole,” Dobbins added.

Defense Secretary Chuck Hagel also said on a weekend visit to Kabul that he received assurances that Afghanistan would eventually sign the Bilateral Security Agreement, which lays out future rules for foreign troops including limits on raids on homes.

Karzai initially endorsed the deal but later said the signature could take place only after the presidential election in April, warning against a NATO presence if it just meant “more bombs and killings.”

“To the Americans, I say: why must the Afghan people pay the price for this war on terrorism?” Karzai told the French newspaper Le Monde in an interview published Tuesday.

His stance has outraged U.S. officials and lawmakers, who have threatened a complete pullout if Karzai does not sign by the end of the year. “This brinksmanship is unwarranted and, frankly, insulting to the sacrifices made by the United States military and taxpayers, and is not in Afghanistan’s best interest,” said Sen. Robert Menendez, a member of President Barack Obama’s Democratic Party and chairman of the Senate Foreign Relations Committee.

Sen. Bob Corker, the top Republican on the committee, accused Karzai of “flakiness” and of being an “irrational and irresponsible partner.”

Dobbins said that Karzai was likely seeking to maintain leverage and was calculating that the United States would keep troops in Afghanistan no matter what. “We try to tell him that American opinion isn’t exactly where he thinks it is and that he is playing with fire,” Dobbins said.

Opinion polls have shown that the U.S. public is eager to end the country’s longest-ever war, which has killed more than 2,000 U.S. troops. In 2011, the United States withdrew from Iraq after failing to secure a similar troop agreement at the end of a separate, more controversial war.