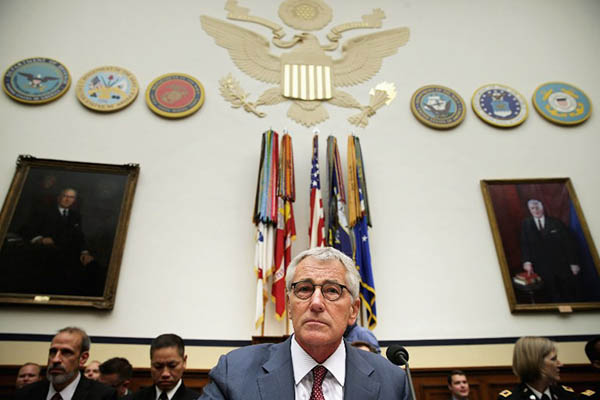 The measure will now proceed to the Senate, where it is expected to pass before being ratified by the president.

Despite misgivings by war-weary Democrats that the move could open the door to full-blown American military intervention in the Middle East, and concern by conservatives that the plan falls short of what is needed to defeat the Islamic State (I.S.) group, the House of Representatives voted 273 to 156 to approve Obama’s train-and-equip plan.

The measure was included as an amendment to a stop-gap federal spending measure which also easily passed the House. The overall bill now shifts to the Senate, where leaders are confident it will pass Thursday and head to the president for his signature.

Obama has pressed Congress to provide him political cover to initiate military action in Syria against I.S., although the White House and many lawmakers believe he has the constitutional authority to launch airstrikes in Syria, as he has done in Iraq, to protect U.S. national security interests.

The president and his chief congressional rival, House Speaker John Boehner, both hailed the vote as an important initial step forward in taking on I.S., with Obama calling on the Senate to green-light the measure as part of his “comprehensive and sustained counter-terrorism strategy.”

But many Republicans feel Obama’s plan does not do nearly enough to meet the goal of destroying I.S., which has overrun large areas of Iraq and Syria. Even number two House Republican Kevin McCarthy said he was “not convinced” that it would change the balance of power on the ground, and suggested wider military action was necessary.

With Democrats split on the issue, the party’s House number two Steny Hoyer sought to rally Congress to back the commander-in-chief in a time of crisis. “We are united in our resolve to meet this threat. We clearly may have differences on this House floor, but we are Americans when it comes to defending our people, and our country,” Hoyer told colleagues.

With the amendment attached to a temporary spending bill that expires Dec. 11, lawmakers are gearing up for a broader debate—after congressional midterm elections Nov. 4—on whether to approve a new authorization for the use of military force to give Obama powers to prosecute a wider war against the jihadists in Iraq and Syria. McKeon’s amendment puts important checks on Obama’s power, including a prohibition against U.S. combat troops in Syria and requirements that the administration keep Congress in the loop with regular reporting about the operation.

Still, opponents warned of a quagmire ahead. Arming and training the Free Syrian Army, whose fighters have been accused of colluding with I.S., “runs a great risk of backfiring,” House Republican Tom McClintock warned, noting I.S. is “armed to the teeth with American equipment” and that alliances in the Middle East can change with lightning speed. “Our consistent experience in this region should be screaming this warning at us: we’re making a big mistake,” he said.

Some Democrats warned that the move marked a slippery slope that would lead to U.S. boots on the ground. But Secretary of State John Kerry, back from a week of international coalition-building in the region, echoed Obama in insisting today’s case was different.

“This is not the Gulf War in 1991. It is not the Iraq war in 2003,” Kerry argued before the Senate Foreign Relations Committee, a panel he used to chair as a senator. Current chairman Senator Robert Menendez warned Kerry that Congress might scrap the open-ended authorization to use military force approved in 2001, under which the White House says it can conduct present-day action. Menendez said reliance on the 2001 authorization was tied to a “thin theory that that ISIL is associated with Al Qaeda.”

Energy Ministry Clarifies No Decision as Yet on...

NAB Reaffirms it has Recovered Rs. 821bn Since...

NAB Only Deposited Rs. 6.5bn of its Recoveries:...