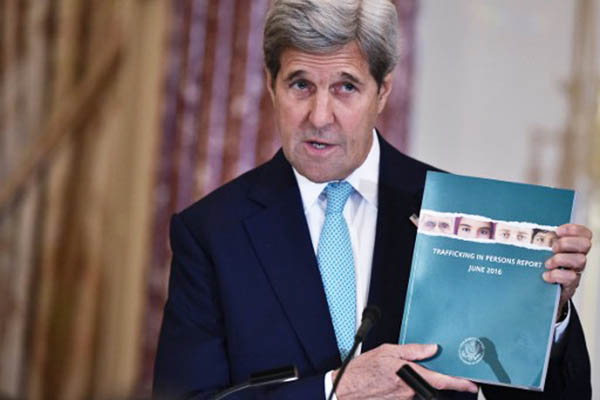 The United States on Thursday blacklisted eight more countries for failing to combat human trafficking, including fledgling democracy Myanmar, but was criticized for taking an easier line on Thailand.

Announcing the release of the State Department’s annual human trafficking report, Secretary of State John Kerry insisted the rankings were based on objective criteria, and not political favor. But activists, while welcoming the designation of Myanmar and Uzbekistan to the worst category of wrongdoer, complained that U.S. allies Thailand and Malaysia got off relatively lightly.

“There are some tough calls. In the end, they come down to an element of discretion, but not much, because we have a fixed set of rules that Congress had created, and we follow those rules,” Kerry said. “The conclusions are based on facts and are based on a lot of analysis over the year,” he said.

Djibouti, Haiti, Papua New Guinea, Sudan, Suriname and Turkmenistan were also added to the now 26-strong blacklist of governments the State Department believes are not fighting people smuggling or slavery. Kuwait and Thailand found themselves promoted from this “Tier 3” list of worst offenders to the “Tier 2 watch list” of countries making some kind of effort to combat the trade in persons but still under scrutiny.

Libya, Somalia and Yemen were judged special cases whose governments are in too much chaos to be judged.

Pakistan, which was placed on the “Tier 2 Watch List” in 2014 due to a rise in human smuggling, continues to make “significant efforts” to eliminate trafficking, according to the State Department. However, the reports notes that law enforcement and prosecution remains mixed, and recommends Islamabad increase convictions, “particularly of labor trafficking,” and provide resource to increase services for victims, including for men and boys. The country should also expand efforts to collect, analyze and accurately report anti-trafficking data, it adds.

Last year, the State Department was criticized for not including Myanmar on its Tier 3 list, amid allegations that Washington was turning a blind eye to slavery while encouraging a slow transition to democracy. Myanmar held contested general elections last year won by the party of veteran rights activist and Nobel laureate Aung San Suu Kyi, who now steers the country’s first civilian government.

Suu Kyi had spent a decade fighting corrupt military rule, and Washington has been keen to support her once pariah country on the slow road to democratic reform. But much remains to be done, and the government has been accused of backsliding, particularly as regards the fate of the persecuted Rohingya Muslim minority.

This year’s report on Myanmar dubs it “a source country for men, women, and children subjected to forced labor and for women and children subjected to sex trafficking, both in Burma and abroad.” People from across Myanmar are subject to abuse, but the report says “Rohingya individuals are particularly vulnerable to sex and labor trafficking in Rakhine State, including forced labor perpetrated by government authorities.”

Myanmar has been on the “Tier 2 watch list” for four years—the maximum period it can be allowed under U.S. law to improve its practices or be relegated to the third tier—which is what has now happened.

Washington had also been accused of taking too lenient an approach to Uzbekistan, where the government makes no attempt to hide the fact that it press-gangs civil servants into forced labor to harvest cotton. This year report notes that “government-compelled forced labor of adults remains endemic during the annual cotton harvest” and concludes that the Uzbek government is not making any significant attempt to halt trafficking.

Human rights watchdogs welcomed the demotion of Myanmar and Uzbekistan, which they felt had been unfairly protected from scrutiny for political reasons in last year’s report, but expressed regret that Thailand and Malaysia were not also being held to account.

“We’re encouraged by the State Department’s decision to downgrade Burma—that was a country that we were paying pretty close attention to,” said Kristen Abrams, acting director of anti-trafficking umbrella group ATEST. “We’re also equally encouraged by the right of last year’s wrong on Uzbekistan, a country that has state orchestrated forced labor,” she said.

But watchdogs remain concerned that Washington is going easy on its allies in Southeast Asia, where the fishing industry in particular is regularly accused of using forced labor in inhumane conditions at sea. “Starting with Thailand, we have seen some willingness to reform some of their laws, but it’s not made any significant impact on the ground,” Abrams said. “With Malaysia, we know that they were moved up last year for political reasons. It was unjustified then and it remains unjustified today,” she said, citing a failure to investigate mass graves.

The report notes that: “Discoveries of migrant camps and mass graves along the border with Thailand in 2015 generated reports some officials were complicit in facilitating migrant smuggling, which may have included trafficking crimes.” But it concludes that Malaysia is “making significant efforts” to meet minimum standards to fight the crime.