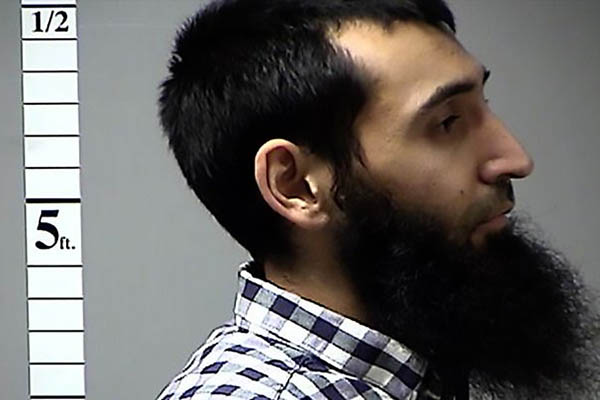 Observers say it is much harder for radicalized Muslims in U.S. to safely find support and build networks offline

Sayfullo Saipov, the radicalized Uzbek who mowed down eight people on a New York bike path, apparently developed his plot in relative isolation, like most other jihadist attackers in the United States. But in Europe many have had community support, an underground network, or even a hardline Islamist to guide them, as in the twin attacks in Spain in August.

What makes the difference?

Experts say that in part, a better rooted, more affluent U.S. Muslim community shows no tolerance for anyone exhibiting sympathy for causes like the Islamic State group or Al Qaeda. And tougher and expansive U.S. laws and more aggressive law enforcement than Europe have also made a difference. Together, they leave aspiring jihadists in the United States isolated with their social media links and, at times, just a few friends in the know.

Saipov, who crashed a rented truck down a busy New York bike path on Tuesday, is so far believed by investigators to have been “self-radicalized” online without any apparent support inside the United States. Analysts say that’s because it is much harder to safely find support.

“We tend not to have large clusters in the U.S. … For the most part you are talking about ones and twos,” said Seamus Hughes, deputy director of the Program on Extremism at George Washington University. Hughes said one fundamental reason is distance: the country is much farther away from jihadist networks and it is much harder to travel to the Middle East because of official no-fly lists.

European Muslims find it much easier to travel to areas where radical groups like Islamic State group operate. As a consequence, he said, “We don’t have the kind of in-person recruitment done in Europe.”

Another factor is the expansive use of the charge of “material support of terrorism,” a catch-all that “allows the FBI to interject themselves at an earlier stage than our European partners,” Hughes said.

For critics, the FBI is too aggressive and stretches the law with undercover schemes that entrap people who are not really threats. But the net effect is to prevent them from establishing connections and frightening others thinking of trying to build networks. According to Daveed Gartenstein-Ross, a senior fellow at the Foundation for Defense of Democracies think tank, heavier prison sentences in terror cases in the U.S. makes a difference.

U.S. sentences are 15-20 years, compared to four to seven years in Europe, which releases terror convicts back into the community much more quickly. That helps sustain dangerous Islamist cells, he said. That is not to say the United States has not had its own cells or ringleaders, Gartenstein-Ross notes.

Anwar al Awlaki, one of the most influential jihadist thinkers and propagandists, was born and raised in the United States before he joined Al Qaeda in Yemen and was killed in a 2011 drone strike. And in the late 2000s a cell that involved maybe 20 people developed around the Somali community in Minneapolis that became an effective body to recruit people to join I.S.

“That was clearly a network,” like those in Europe, he said. “They have not been prevented, they still exist.”

The Somali cell more resembled those in Europe, rooted in a more recent, less wealthy, poorly educated immigrant community. For the most part American Muslim communities are wealthier, and better educated on average than European communities. That makes them less alienated and better-integrated, according to Corey Saylor, an expert on Islamophobia at the Council on American-Islamic Relations (CAIR)

U.S. Muslim groups will more readily chase out of the community and the mosque someone who espouses radical ideas. “If somebody in the congregation is talking about it, they get pushed out fairly quickly. There is no hospitality” for it, he said.

While neither side talks about it much, U.S. Muslim communities have been more willing to report possible threats to law enforcement than in Europe. That was helped by outreach programs under president Barack Obama, according to Gartenstein-Ross. That may have ebbed under President Donald Trump, however, given his open mistrust of Muslims. “The lack of trust has impeded cooperation; suspicion has likely increased,” he said.

“For the most part American Muslim communities are wealthier, and better educated on average than European communities. That makes them less alienated and better-integrated, according to Corey Saylor, an expert on Islamophobia at the Council on American-Islamic Relations (CAIR)”

Unfortunately, we see elected officials protecting the radicals such as Mayor de Blasio who under the urging of of Linda Sarsour, and CAIR disarmed the NYPD surveillance programs.

We need fewer feel good stories about this problem, and more realistic discussions of radical groups like CAIR gaining legitimacy.