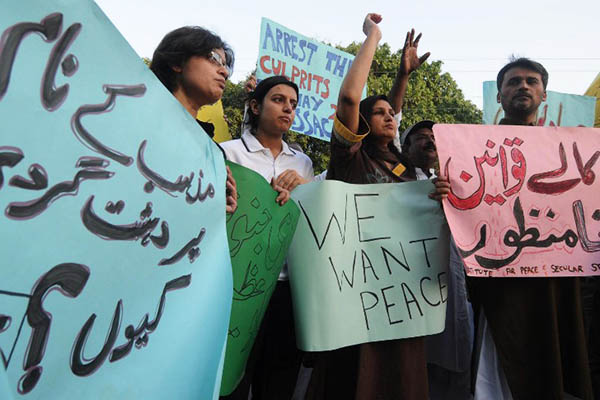 Civil rights activists protest the killing of Ahmadis in a 2010 attack in Lahore, Pakistan. Arif Ali—AFP

Ahmadiyya leader says new caucus will advocate for rights of all persecuted religious communities in the world.

American lawmakers on Friday announced a caucus to fight for the rights of the Ahmadi minority, which has faced attacks in Pakistan and elsewhere in the Islamic world.

The creation of a caucus—a group in the U.S. Congress that shares an agenda—is primarily symbolic, but lays the groundwork for lawmakers to be more active.

Republican Rep. Frank Wolf, the co-chair with Democrat Jackie Speier, said the Ahmadiyya Muslim Caucus would press for the rights of Ahmadis in trouble in Pakistan, Indonesia, Saudi Arabia and elsewhere. “We have an obligation. America cannot be silent,” Wolf told an event at Congress launching the caucus.

Imam Naseem Mahdi, national vice president and missionary in charge of the Ahmadiyya Muslim Community USA, said that the caucus would advocate not just for Ahmadis but “for the rights of all persecuted religious communities in the world.”

“In time, we hope that foreign governments that persecute our community or otherwise permit militants to attack Ahmadi Muslims with impunity will take notice of the caucus,” he said.

In 1974, Pakistan declared that Ahmadis were non-Muslims. The community has faced rising attacks, including a 2010 assault on Lahore mosques that killed nearly 100 people.

Indonesia’s constitution guarantees freedom of religion, but Ahmadis there have also faced violence, including a deadly 2011 rampage in West Java by a mob trying to prevent Ahmadis from worshipping.