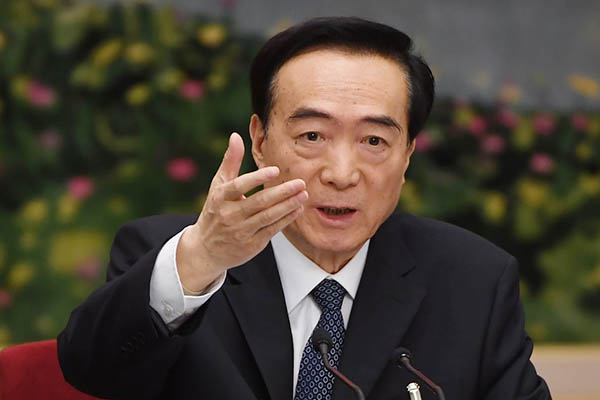 A broad group of U.S. lawmakers on Wednesday called for sanctions against China’s top official in the Xinjiang region over alleged abuses—including mass detentions—against the Uighur minority.

The letter signed by 24 senators—almost one-quarter of the body—and 19 House members across party lines also called on the United States to step up disclosure requirements about Chinese companies held to be complicit in rights violations.

The lawmakers asked President Donald Trump’s administration to target Chen Quanguo, the Communist Party secretary in the northwestern Xinjiang region, who earlier held a similar position in Tibet and has become reputed for his handling of minorities.

U.N. investigators say that some one million people have been rounded up in Xinjiang in a massive network of cramped detention camps, with China pressing Uighurs to renounce Islam through actions such as forcing them to eat pork, which is forbidden for Muslims.

“We are disappointed with the administration’s failure so far to impose any sanctions related to the ongoing systemic and egregious human rights abuses in Xinjiang,” said the letter addressed to Secretary of State Mike Pompeo and other top officials. The lawmakers acknowledged the “strong rhetoric” from Vice President Mike Pence and others but added, “words alone are not enough.”

The letter was signed by Senators Marco Rubio, a Florida Republican close to Trump on foreign policy, and Bob Menendez, the top Democrat on the Senate Foreign Relations Committee. Others who signed it include Senator Elizabeth Warren, a Democratic presidential candidate, Senator Mitt Romney, a former Republican presidential contender, and Representatives James McGovern and Chris Smith, who head a congressional commission on human rights.

The lawmakers asked the Trump administration to invoke the Magnitsky Act on Chen and other top officials in Xinjiang. The act—named after a Russian accountant who died in detention—calls for the seizure of assets and a ban on U.S. visits by any foreign official found to be behind human rights abuses.

China denies the accounts of mass detention, saying it is running educational training centers as part of a fight against Islamic extremism in Xinjiang.