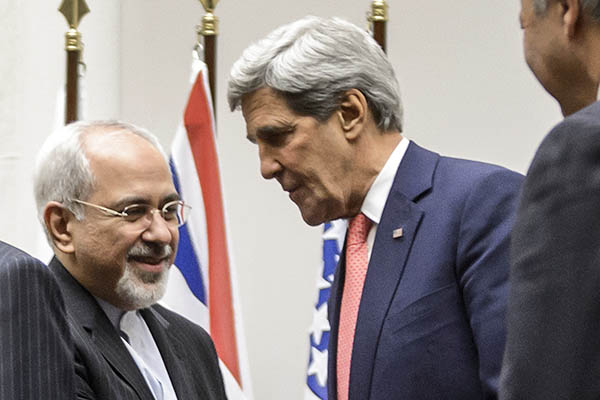 Members of Congress advocate imposing tougher sanctions on Tehran if nuclear deal is not respected.

Hawkish U.S. lawmakers said Sunday that Congress should press for tougher sanctions against Iran that would take effect if Tehran does not respect the nuclear deal struck in Geneva.

After marathon talks in the Swiss city, world powers reached a landmark agreement with the Islamic republic in what U.S. President Barack Obama called “an important first step.” The deal slackens some of the sanctions imposed by the United States and its allies, and warns that they will be re-imposed if Iran does not respect its own engagement to limit its nuclear program.

But skeptical members of Congress insisted Washington must up the ante in order to maintain pressure on Iran and force it to go beyond the deal and start dismantling existing nuclear infrastructure.

“I will continue working with my colleagues to craft bipartisan legislation that will impose tough new economic sanctions if Iran undermines this interim accord or if the dismantlement of Iran’s nuclear infrastructure is not underway by the end of this six-month period,” Republican Sen. Mark Kirk said in a statement. Kirk is involved in congressional negotiations underway to strengthen the current sanctions regime.

One Senate aide summed up the situation as “sanctions now that would take effect if they cheat or if there isn’t dismantlement underway in six months.” In this way, Congress would agree not to short-circuit the six-month timetable set in Geneva while threatening Tehran with a fierce tightening of sanctions already in place.

“If Iran does not consent to a comprehensive agreement that ensures it cannot acquire a nuclear weapon, there is a broad consensus in Congress to impose even tougher sanctions,” said Sen. Carl Levin, Democratic chairman of the Senate Armed Services Committee.

House Speaker John Boehner, the top Republican in the House of Representatives, said: “The interim deal has been and will continue to be met with healthy skepticism and hard questions, not just of the Iranians, but of ourselves and our allies involved in the negotiations.” He called on the administration to preserve the sanctions regime against Iran. “Otherwise, we will look back on the interim deal as a remarkably clever Iranian move to dismantle the international sanctions regime while maintaining its infrastructure and material to pursue a breakout nuclear capability.”

But Obama, in an address late Saturday, warned lawmakers planning to impose new sanctions that such a move could “derail” diplomatic moves under way to get a comprehensive deal: “Now is not the time to move forward on new sanctions.”

But many members of Congress are critical of the agreement, which halts parts of Iran’s nuclear program. In return, world powers, including the United States, Russia, China, Britain, France, and Germany plus the European Union, agreed to a set of “modest” measures to ease sanctions that have choked the Iranian economy.

“We just feel more pressure needs to be brought on Iran rather than to make this deal and take the pressure off of Iran, which will allow them to go forward with their economic revitalization in the country,” Ed Royce, chairman of the House Foreign Affairs Committee, told CNN.

House Intelligence Committee Chairman Mike Rogers, also in an interview with CNN, said Iran has been given “a permission slip” to continue enrichment. He said: “We made this mistake in Pakistan. We made this mistake in North Korea … Why would you make the same mistake to a nation that will proliferate a nuclear-arms race in the Middle East if they’re successful in getting a nuclear weapon?”

In July, 400 lawmakers out of 435 in the House of Representatives voted in favor of strengthening sanctions. These could, for example, blacklist the entire Iranian car-making sector. The Senate announced this past week that it would adopt new sanctions legislation in December, a final step before the two versions are reconciled.