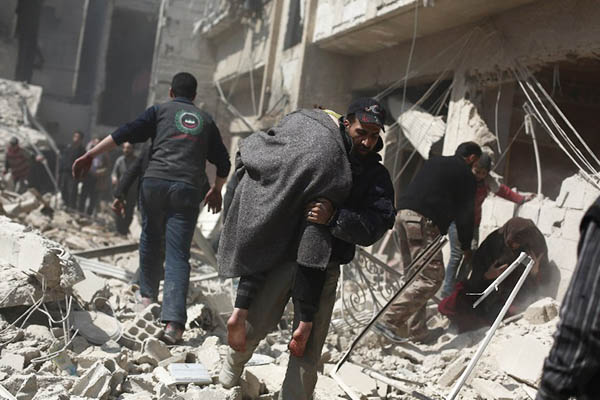 The U.S.-led military campaign to oust the Islamic State group from the Syrian city of Raqa in 2017 killed hundreds of civilians in indiscriminate bombing, amounting to possible war crimes, Amnesty International said on Tuesday.

The military operation failed to take “adequate account” of civilians and the “precautions necessary to minimize harm” to them in the city, I.S.’s de facto capital in Syria, the human rights group said in a report.

“Coalition claims that its precision air campaign allowed it to bomb I.S. out of Raqa while causing very few civilian casualties do not stand up to scrutiny,” the report concluded. “The coalition strikes detailed in this report appear either disproportionate or indiscriminate or both and as such unlawful and potential war crimes.”

Coalition spokesman U.S. Colonel Thomas Veale criticized Amnesty for the report, saying the group had not checked findings with the military or asked for comment. But he said his biggest objection was Amnesty’s assumption that the coalition violated international law. “They are literally judging us guilty until proven innocent,” Veale told Pentagon reporters. “That’s a bold rhetorical move by an organization that fails to check the public record or consult the accused.”

The United States led a four-month campaign of airstrikes from June last year, dubbed a “war of annihilation” by U.S. Defense Secretary James Mattis, to oust I.S. from Raqa.

Amnesty researchers traveled to the devastated city in February and spent two weeks visiting 42 coalition airstrike sites, interviewing 112 witnesses and survivors. The report—‘War of Annihilation’: Devastating Toll on Civilians, Raqa—Syria—details the experiences of four families “whose cases are emblematic of wider patterns.”

Between them, they lost 90 relatives and neighbors—39 from a single family—almost entirely from coalition airstrikes, according to Amnesty. “The cases provide prima facie evidence that several coalition attacks which killed and injured civilians violated international humanitarian law,” the report said.

Amnesty said it has written to defense officials in the United States, Britain and France—whose forces carried out the airstrikes in Raqa—seeking additional information about these cases and about other attacks. “When so many civilians are killed in attack after attack, something is clearly wrong, and to make this tragedy worse, so many months later the incidents have not been investigated,” said Donatella Rovera, Amnesty’s senior crisis response adviser. “The victims deserve justice.”

U.S. Colonel Sean Ryan, another coalition spokesman, told Britain’s Press Association that Amnesty International UK director Kate Allen should “leave the comforts of the U.K.” and travel to Iraq and Syria to see how the coalition’s forces were “fighting an enemy that does not abide by any laws, norms or human concern.” He insisted the coalition made “painstaking efforts” to assess allegations of civilian casualties and any “non-combatant death or injury is a tragedy.”

A spokesman for the U.K. ministry of defense said it had been “open and transparent” over its nearly 1,700 Syrian strikes. “We do everything we can to minimize the risk to civilian life,” he added. “We must accept that the risk of inadvertent civilian casualties is ever present.”