Home Latest News U.S. Military to Stay in Syria ‘As Long As We Need To’

U.S. Military to Stay in Syria ‘As Long As We Need To’ 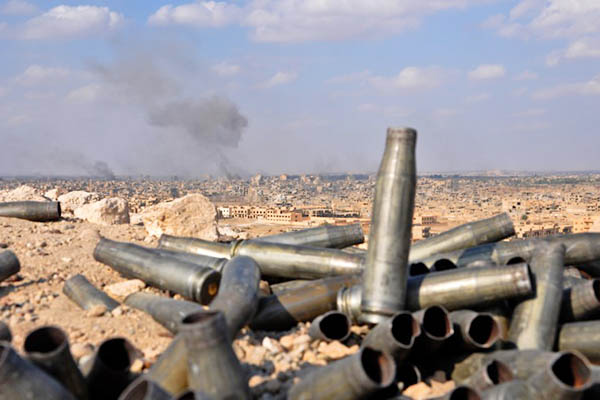 The U.S. military plans on staying in Syria as long as necessary to ensure the Islamic State group does not return, a Pentagon official told AFP on Tuesday, as the fight against the jihadists winds down.

“We are going to maintain our commitment on the ground as long as we need to—to support our partners and prevent the return of terrorist groups,” Pentagon spokesman Eric Pahon said.

The United States currently has approximately 2,000 troops on the ground in Syria, where they have been helping train and advise Kurdish and Arab partner forces in the fight against I.S. Now that the jihadists have been cleared from all but a few pockets of territory, the United States is assessing its future presence in the civil war-torn nation.

Pahon said the U.S. troop commitment would be “conditions-based,” meaning no timeline will determine any pull out. “To ensure an enduring defeat of ISIS, the coalition must ensure it cannot regenerate, reclaim lost ground or plot external attacks,” he said. “The United States will sustain a ‘conditions-based’ military presence in Syria to combat the threat of a terrorist-led insurgency, prevent the resurgence of ISIS, and to stabilize liberated areas.”

Syria’s conflict began in March 2011 with anti-government protests, but quickly spiraled into a bitter and complex civil war, with I.S. just one element in a shifting matrix of players. The U.S. military, along with other nations in a U.S.-led coalition, began bombing I.S. in late 2014 but until now has largely declined to address what its role in the tangled conflict might be after the jihadists are beaten. “We are going to be in Syria for some time yet. I don’t want to say that’s 10 years, I also don’t want to say it’s not,” Pahon said. “What people should not expect is that we are going to see the last ISIS guy die and then we are going to abandon our partners.”

The military’s “conditions-based” phrase to define troop commitments is in part a reaction to the administration of Barack Obama, which insisted on a calendar-based withdrawal of troops from Afghanistan. The move bitterly angered U.S. commanders, who saw it as giving the Taliban a countdown on when they could resume operations in earnest.

The open-ended U.S. commitment in Syria will likely rile Russia, which since late 2015 has conducted a separate military campaign to prop up the regime of President Bashar al-Assad. Unlike Russia, the United States is not in Syria at the request or approval of the Damascus government.

Washington has cited Article 51 of a U.N. charter allowing for self-defense of partner forces as legal justification for its military engagement, and that will remain the case going forward.

Russia has claimed its presence is primarily to thwart jihadist groups but the Pentagon says only a tiny portion of Russian strikes have targeted I.S. Moscow doesn’t “appear to have a plan on how to bring a meaningful conclusion to the civil war that addresses the fundamental problems that led to the rise of ISIS, nor do they appear to be serious about the withdrawal of Iranian-backed militias,” Pahon said.

Still, successive U.S. administrations have themselves been criticized for failing to articulate a coherent plan for Syria, and the elapsed time has seen Russian and Iranian influence bloom. Pahon stressed the U.S. would maintain its support for the Kurdish-Arab alliance called the Syrian Democratic Forces (SDF) that have done most of the ground fighting against I.S. and which Sunday on announced the end of operations against I.S.

America’s support to the SDF has infuriated NATO ally Turkey, which sees the Kurdish component as “terrorists.”

These efforts will include restoration of essential services, de-mining and removal of explosive materials, as well as facilitating the flow of humanitarian aid. “This will also set the conditions for internally displaced people and refugees to safely return,” Pahon added.

More than 340,000 people are estimated to have been killed in the Syrian war, and millions have been displaced. U.N.-backed peace talks are ongoing in Geneva, and Pahon said the U.S. continues to support these as the “only path to a legitimate political resolution to the conflict.”