U.S., Pakistan Call for Taliban to Return to Peace Talks 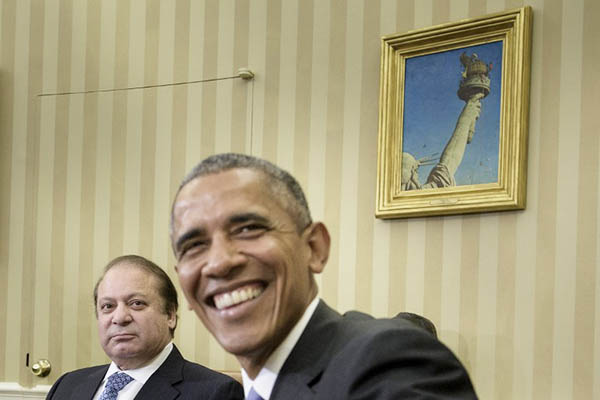 U.S. President Barack Obama and Prime Minister Nawaz Sharif issued a joint call for the Taliban to return to peace talks with the Afghan government, as the pair stressed the positives of a troubled alliance Thursday.

Amid smiles and handshakes, Obama welcomed Sharif to the White House and hailed a “long-standing relationship” between the United States and Pakistan.

The leaders later “called on Taliban leaders to enter into direct talks with Kabul and work toward a sustainable peace settlement,” according to a joint statement.

The U.S. sees Pakistan as one of the few states with influence over the extremists. The new Taliban leader Akhtar Mansour is believed to have close ties to Islamabad. But some in Washington believe Pakistan has not done enough to bring its influence to bear and to persuade the group to renounce violence.

In their talks, Obama stressed to Sharif that Pakistan needed to take action against groups that undermine peaceful dialogue and want to ignite the region. “The bottom line is that there are a lot of deep disagreements between these two countries,” said Michael Kugelman of the Woodrow Wilson Center.

“The U.S. has simply lost patience after so many years of providing arms and money to the Pakistani military, the Pakistanis have simply not done what the U.S. has repeatedly asked them to do in terms of cracking down on militants.”

Since Sharif returned to the prime minister’s office two years ago, both sides have made an effort to find areas of cooperation. America’s relationship with Islamabad is a prickly one, born of an inter-dependency peppered with mutual mistrust.

Ties were plunged into deep crisis when 9/11 mastermind Osama bin Laden was discovered to be living in Abbottabad. Obama on Thursday hailed cooperation on economic, scientific and education issues, even as security disagreements loomed large over the Oval Office meeting.

Islamabad’s ties with the Afghan Taliban, support for terror groups that target India and the United States and its rapidly growing nuclear arsenal are seen by Washington as monumental security headaches. And U.S. officials see little change in the attitude of Pakistan’s powerful security services to these problems.

In a telling sign of that power, Sharif’s visit was bookended by U.S. visits from Rizwan Akhtar, the head of Pakistan’s Inter-Services Intelligence, and the upcoming visit of Chief of Army Staff Gen. Raheel Sharif.

Obama recently announced that U.S. troops would be staying in Afghanistan longer than he had promised, but few believe a military solution is possible. The White House is keen to get the Taliban back to the negotiating table, after a first round of talks led to a dead end.

Kabul has accused Islamabad of harboring and nurturing Taliban insurgents—allowing them to launch attacks in Afghanistan before melting back across the border. There are growing calls in Washington for the United States to limit the transfer of weapons and funds to Islamabad.

“Pakistan must fulfill its obligations to deny safe haven to all terrorist groups and take action against those who aid, support and abet them,” said Republican presidential candidate Marco Rubio in a statement coinciding with the meeting. “Continued U.S. security assistance should be conditioned on Pakistan’s actions against militants that seek to destabilize Afghanistan and threaten the U.S.”

The United States has also pressed Pakistan to crack down on radical groups like the Haqqani network and Lashkar-e-Taiba.

Ahead of Sharif’s visit there have been suggestions that cooperation and a possible deal could be reached to more effectively control Pakistan’s nuclear weapons. During George W. Bush’s presidency, a deal was reached with India to normalize nuclear cooperation in return for safeguards.

There was little sign of such a deal with Pakistan. Obama and Sharif discussed the “continuing threat of nuclear terrorism,” but agreements were limited to a commitment to “continue to stay engaged” on the issue.