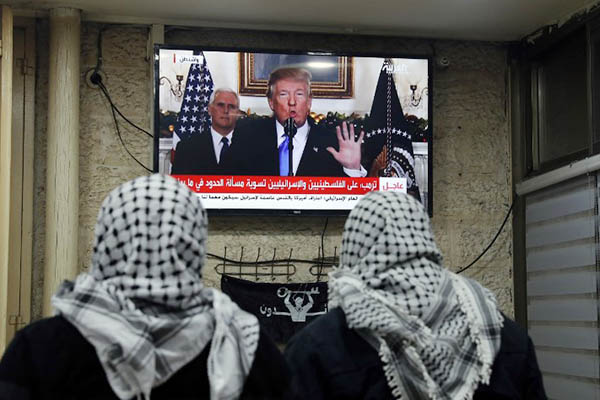 The White House is to renew efforts to reach an Israeli-Palestinian peace deal, officials said on Friday, despite outrage over President Donald Trump’s decision to recognize Jerusalem as Israel’s capital.

Senior administration officials said efforts to push the process forward will be rekindled as soon as next week, in the hope that anger at Trump’s move will subside.

Trump on Dec. 6 announced a break with decades of American policy, effectively ignoring Palestinian claims on the Holy City. The decision has sparked almost universal diplomatic condemnation and deadly protests in the Palestinian territories.

Palestinian president Mahmud Abbas—82 years old and facing the prospect of entering the history books as the leader who “lost Jerusalem”—took the dramatic move of cancelling a planned meeting with Vice President Mike Pence. The vice president is due to arrive in Jerusalem on Wednesday, although he is not slated to meet Palestinian leaders.

“We understand that the Palestinians may need a bit of a cooling off period, that’s fine,” said one senior administration official.

The White House hopes that Pence’s visit can begin to draw a line under the issue. “Obviously the last couple of weeks in the region have been a reaction to the Jerusalem decision,” said a second senior administration official. “We’ve seen a lot of the emotion that has been displayed on that.”

“This trip is kind of part of the ending of that chapter and the beginning of the next chapter… We still continue to be focused on a peace process and how we ultimately bring that situation to a conclusion.”

The vice president will be joined in Israel by Trump’s chief peace negotiator Jason Greenblatt, who has not met his Palestinian interlocutors since Dec. 6. “We will be ready when the Palestinians are ready to reengage,” said the first official.

But hopes for a quick resumption of peace talks may prove optimistic. On Friday alone, four Palestinians were killed and hundreds wounded in violence with Israeli forces across the Palestinian territories. Turkish President Recep Tayyip Erdogan described the move as a “bomb” thrown at the entire Middle East.

And U.S. administration officials risked pouring gasoline on the flames on Friday, stating that the Western Wall—in largely Palestinian east Jerusalem—would almost certainly be part of Israel under any deal.

“We cannot envision any situation under which the Western Wall would not be part of Israel,” said the first official. “But as the president said, the specific boundaries of sovereignty of Israel are going to be part of the final status agreement. We cannot imagine Israel would sign a peace agreement that didn’t include the Western Wall.”

That stance could open the door to other parts of east Jerusalem falling under Palestinian control, but is likely to be seen as a further sign of pro-Israeli bias in Washington.

Trump’s move has called into question whether the U.S. can serve as a fair arbiter, a role it has played for much of the last half century. The administration is betting that closer ties between Israel and Saudi Arabia open the path to peace.

“The hope in the Trump administration is that the Saudis will use their financial resources to persuade the Palestinians to agree to make peace with Israel on terms Israel will accept,” said Richard Haass, President of the Council on Foreign Relations.

Trump came to office claiming he could make “the ultimate deal,” but that effort now risks being derailed by his own actions. “We aren’t setting any kind of deadlines or timeframes. There’s one thing I’m sure of in this job, is that any deadline we set, we will blow past,” said a U.S. official.