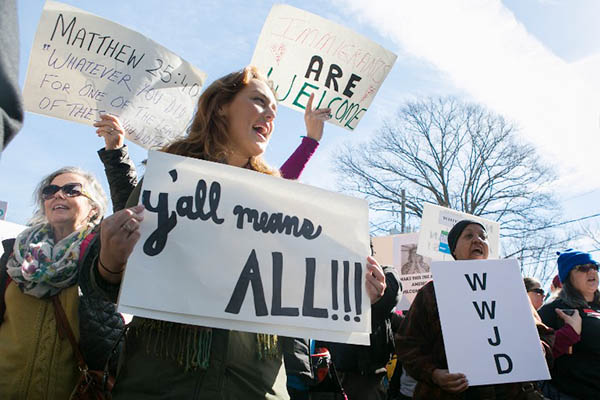 In first Trump-era crackdowns, individuals have been rounded up from various cities across America.

The federal Immigration and Customs Enforcement agency rounded up undocumented individuals living in Atlanta, Austin, Chicago, Los Angeles, New York and other cities two weeks after Trump signed an executive order that broadened which undocumented immigrants would be targeted for deportation. According to ICE, however, the operations were “routine.”

“The focus of these operations is no different than the routine, targeted arrests carried out by ICE’s Fugitive Operations Teams on a daily basis,” said agency spokeswoman Jennifer Elzea.

David Marin, head of ICE’s removal operations in Los Angeles, told reporters that approximately 160 people had been arrested in the California metropolis. Some 75 percent of them had prior felony convictions, he said, adding that some people had been nabbed solely because they were undocumented.

By Friday night, 37 undocumented immigrants had already been expelled to Mexico.

In a Jan. 25 decree, Trump prioritized the deportation of undocumented males who had been convicted of or “charged with any criminal offense,” including misdemeanors. The order was a move to make good on his campaign pledge to crack down on America’s undocumented population, estimated at 11 million people.

Marin said the operations were planned prior to Trump’s swearing-in and were comparable to past actions. He rebuffed reports about ICE checkpoints and random sweeps, calling them “dangerous and irresponsible.”

“Reports like that create panic, and they put communities and law enforcement personnel in unnecessary danger,” Marlin said.

The raids, which hit residential areas and workplaces, sparked protests and provoked the ire of elected Democratic representatives, notably in California and particularly in Los Angeles, where the Pew Research Center estimates around a million undocumented migrants reside. “President Trump’s policy change betrays our values,” Democratic Senator Dianne Feinstein said in a statement. “Tearing families apart isn’t what this country stands for.”

In Austin, Texas, where 100,000 unauthorized migrants live, a bystander captured video footage of an arrest, which made local front-page news and ignited demonstrations.

Democratic Congressman Joaquin Castro of Texas confirmed the launch of a “targeted operation” aimed at arresting the undocumented. He has asked ICE officials to “clarify whether these individuals are in fact dangerous, violent threats to our communities, and not people who are here peacefully raising families and contributing to our state.”

Castro said the roundups were part of “Operation Cross Check”—a series of large-scale raids that began in 2011 under Barack Obama. The agency conducted the last sweep in March 2015, corralling 2,059 undocumented immigrants deemed threats to “public safety.”

In New York, which hosts the country’s largest population of undocumented immigrants—1.15 million, according to Pew—a few hundred people demonstrated near the immigration services office.

Obama deported more immigrants than any of his predecessors, prioritizing the expulsion of repeat criminal offenders or those convicted of serious crimes, including rape, child pornography and gang membership. Undocumented migrants with repeated drunk driving convictions were also targeted.

With his decree, Trump—who vowed as a candidate to deport some three million undocumented immigrants with criminal records—broadens the scope of the Obama administration’s policy, dropping the distinction between convicted criminals and those who have simply been charged.

Activists have rallied around the case of Guadalupe Garcia de Rayos—a 35-year-old mother arrested during a routine visit to Phoenix, Arizona who has become symbolic of Trump’s hardline measures.

The mother of two U.S.-born children was caught in 2008 using a fake social security number and slapped with a deportation order. Authorities had not previously expelled her for practical reasons, however, as she posed little threat. But by Thursday, she was in Nogales, the Mexican border town where she crossed into the U.S. more than two decades ago.

The Mexican Foreign Ministry said her deportation “illustrates the new reality of Mexican community living in the United States in the face of more severe application of migration controls.” The ministry urged Mexican citizens to “take precautions” and stay in close contact with consular authorities, echoing instructions from immigrant advocacy groups stateside.

El Salvador, in Central America, also is home to many recent immigrants to the United States. Their remittances are key to its economy. “We are working to ensure that Salvadorans who are overseas, especially… in the United States are protected,” Salvadoran President Salvador Sanchez Ceren told local media.