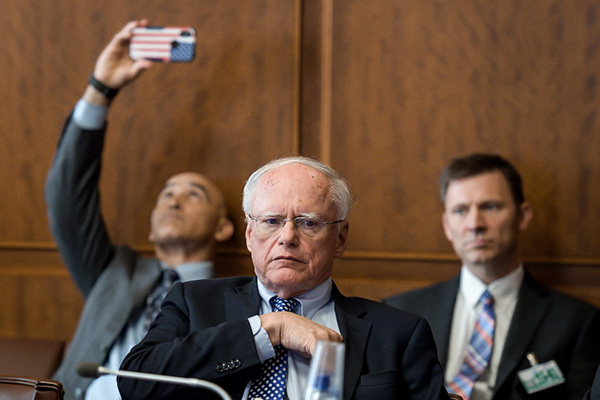 Washington’s top envoy for Syria rejected on Thursday an allegation put forward in a U.N. report that some U.S.-led airstrikes in the conflict-torn country could possibly be categorized as indiscriminate attacks, amounting to “war crimes.”

James Jeffrey, the U.S. special representative on Syria, dismissed findings published in a U.N. report on Wednesday suggesting that the U.S.-led coalition had with a number of airstrikes in the country “failed to employ the necessary precautions to discriminate adequately between military objectives and civilians.”

The U.N. Commission of Inquiry, which has been investigating human rights violations in Syria’s drawn-out war for the past eight years, pointed to a series of airstrikes carried out by the coalition in January in the eastern province of Deir Ezzor, including one that killed 16 civilians. “The Commission finds that there are reasonable grounds to believe that international coalition forces may not have directed their attacks at a specific military objective, or failed to do so with the necessary precaution,” the report said. “Launching indiscriminate attacks that result in death or injury to civilians amounts to a war crime in cases in which such attacks are conducted recklessly,” stressed the Commission, which has also suggested in previous reports that U.S.-led strikes in Syria could amount to war crimes.

The Commission has also repeatedly accused the Syrian government and its main backer Russia, as well as other actors in the conflict of a wide range of war crimes.

“We take extreme care in every military operation,” Jeffrey told journalists in Geneva when asked about the report. “We do not accept the findings of that particular body,” he said. Jeffrey was in Geneva on Wednesday for consultations with the U.N. envoy for Syria Geir Pedersen.

Pedersen, a seasoned Norwegian diplomat who took over the job in January, is trying to help create a committee to draft a post-war constitution for Syria. His predecessor, Staffan de Mistura, stepped down after his four years in the post ended with a yearlong abortive push to form the constitutional committee.

But Pedersen, who has been consulting extensively with the various Syrian actors, as well as with countries with influence in the conflict, voiced optimism that the constitutional committee could soon see the light of day.

Following his meeting with representatives from Britain, Egypt, France, Germany, Jordan, Saudi Arabia and the United States on Thursday, he told journalists he was “confident that we are moving forward. Hopefully I can have positive news on this in the very near future.”

Numerous rounds of U.N.-led peace talks have failed to end a war that has killed more than 370,000 people and displaced millions since it started in 2011 with the repression of anti-government protests.