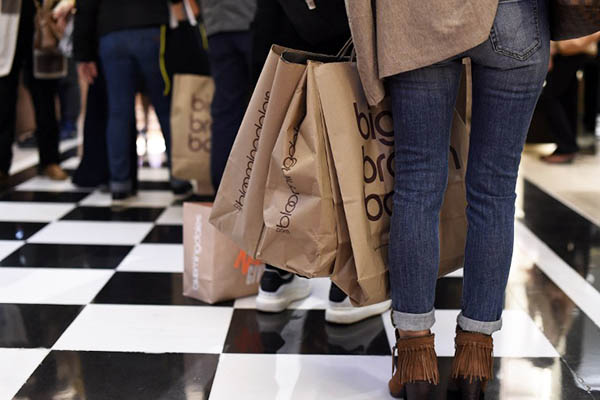 Despite strong economic indicators for consumers, more and more shoppers are opting for online retail over brick-and-mortar shops.

Conventional retailer profits are falling as fewer shoppers head to malls in favor of click-and-buy options offered by Amazon and a trove of emerging online fashion vendors. The trend is all the more striking because retailers see good conditions in the economy for consumers, including strong employment levels.

“We’re frankly scratching our heads,” Macy’s chief financial officer Karen Hoguet, told an analyst conference call. “We see the same economic data you all see and it would point to a customer that would be spending more.”

In the first four months of 2016, all online retail sales rose 8.1 percent over a year ago, compared with just 1.9 percent growth in clothing stores, according to the Commerce Department. “We’re seeing a fundamental reorganization of retail from an automobile-centered model to a smartphone-centered model,” said Andy Dunn, chief executive of Bonobos, a nine-year old men’s apparel store that does most of its sales online. “We’re seeing a tremendous shakeout as we see online grow and offline contract,” Dunn said. Still, he added, “I don’t think we’re moving to an online-only world.”

In women’s apparel, rising online players include websites like Wanelo, which “curates” products from 550,000 vendors and doubles as a social network for shoppers. There are specialty sites for plus-sized women, such as Eloquii, and for consumers focused on sustainable manufacturing, such as Reformation.

There are also fashion websites that combine editorial and selling functions, such as WhoWhatWear, part of the Clique Media Group, which boasts 12 million unique monthly visitors. “People are now realizing they have more options,” said Chris Morran, deputy executive editor Consumerist.com. “I don’t see any of the [newer] companies replacing Gap, but I see them all chiseling way.”

Shoppers say the online experience is greatly improved from just a few years ago, with sellers permitting returns and sometimes paying for the shipping of items that don’t fit. More online vendors lets shoppers easily compare items and prices as well. “It’s not only that you don’t have to leave your house, it’s that you don’t have to walk around,” said one forty-something professional mother of two. “It’s very efficient.”

Men’s fashion too is experiencing seismic shifts. Gone are the days when department stores could rely on a captive audience to buy button-down shirts for the office. Boutique stores like Thomas Pink and Charles Tyrwhitt boast a multitude of fits for different body types that can be bought online once a consumer knows his size.

Bonobos, which began as an online-only men’s store in 2007, began adding small showrooms in 2011 to display product and let customers get fitted. “The store piece of what we do is really profitable,” Dunn told AFP. “But you want the right sized store footprint and you want to be fully integrated with online.”

However, as shipping costs decline and rent and other infrastructure weigh on traditional stories, “brick-and-mortar” stores will be the ones to suffer, Credit Suisse said. That means more retail stores are likely to close.

Nordstrom, which reported earnings Thursday that badly lagged analyst expectations, said it will emphasize a buyer loyalty program and exclusive merchandise. It is also beefing up e-commerce. “We’re seeing a transformation in our business model,” said chief financial officer Mike Koppel. “We continue to see traffic falling off in malls, and how we think about our store base asset will probably require some level of adjustment.”

Macy’s, which announced in January plans to close 40 stores, is emphasizing store-within-store ventures intended to appeal to millennials, such as the off-price Backstage and the beauty-and-spa Blue Mercury stores.

Macy’s Hoguet said the 186-year-old retailer is “always evaluating” its fleet of 870 stores for potential closures. Gap, which a year ago announced plans to cut 175 namesake stores in North America, pledged renewed focus to streamline its operations and whittle its presence internationally to the most promising markets.

Gap to Open 40 Stores in India