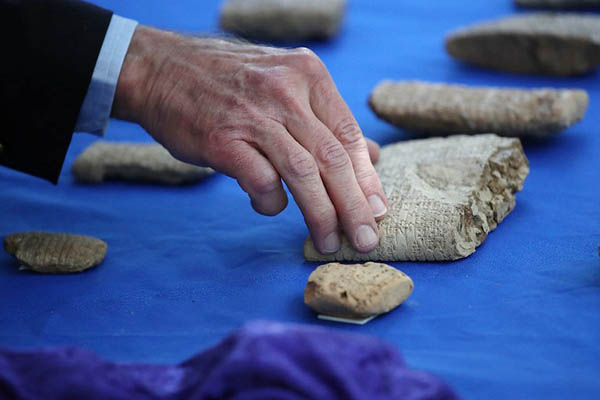 Many of the artifacts come from the ancient city of Irisagrig, date back to 2100-1600 BCE

U.S. officials on Wednesday returned to Iraq 3,800 ancient artifacts that had been smuggled into the United States and shipped to a nationwide arts and crafts retailer.

The items include cuneiform tablets, cylinder seals, and clay bullae. Many of the tablets come from the ancient city of Irisagrig and date back to 2100-1600 BCE, officials said. Packages of cuneiform tablets were initially intercepted by customs agents and falsely labeled as tile samples for retailer Hobby Lobby.

The company last year agreed to forfeit thousands of ancient Iraqi artifacts and pay $3 million to settle a civil suit brought by the U.S. government, attributing its purchase of the illegally imported items to naiveté.

The Department of Justice says thousands of cuneiform tablets and clay bullae were smuggled into the United States via the United Arab Emirates and Israel in packages shipped to the Oklahoma-based company.

Hobby Lobby said it had been acquiring artifacts “consistent with the company’s mission and passion for the Bible” with the goal of preserving them for future generations and sharing them with public institutions and museums.

Steve Green, the billionaire evangelical Christian who founded Hobby Lobby, is chairman of the Museum of the Bible, which opened last year in the U.S. capital.

U.S. Attorney Richard Donoghue said Wednesday that U.S. officials “are proud to have played a role in removing these pieces of Iraq’s history from the black market of illegally obtained antiquities and restoring them to the Iraqi people.”

These pieces “are very important to us and they should be returned home,” said Iraq’s ambassador to the United States, Fareed Yasseen.

The ceremony, which took place in Washington, was the first U.S. repatriation of cultural property to Iraq since 2015.

Since 2008, ICE has returned more than 1,200 items to Iraq, whose cultural property was heavily plundered in the aftermath of the 2003 U.S.-led invasion that toppled Saddam Hussein. Hobby Lobby calls itself the largest privately owned arts-and-crafts retailer in the world with approximately 32,000 employees and operating in 47 states.