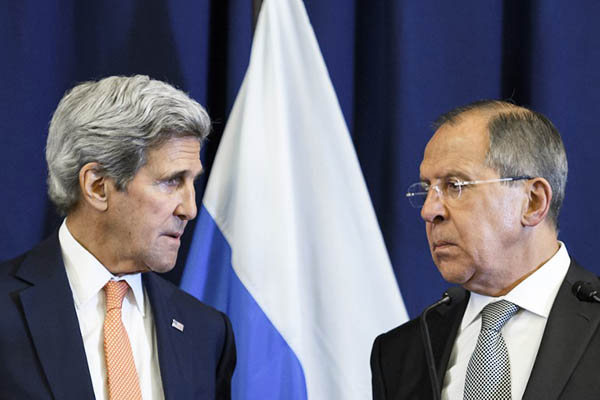 The United States and Russia reached a deal on a new Syrian ceasefire, which, if it holds, could see the first joint military effort by the two powers against jihadists.

U.S. Secretary of State John Kerry and Russian Foreign Minister Sergei Lavrov said that the truce, reached late on Friday, would come into force on Monday, the first day of the Muslim holiday of Eid al-Azha.

The two powers back opposite sides of the conflict, with Moscow supporting the regime of President Bashar al-Assad and the U.S. behind a coalition of rebel groups it regards as moderate. But if Russia is able to pressure Assad to respect the ceasefire for a week, Moscow and Washington will set up a joint coordination unit and begin airstrikes against agreed “terrorist” targets.

“We will jointly agree on strikes against terrorists to be carried out by the Russian and American air forces. We have agreed on the zones in which these strikes will be carried out,” said Lavrov.

The much anticipated—if tentative—breakthrough came at the end of marathon talks between Lavrov and Kerry in Geneva, as the pair push for an end to the five-year civil war that has killed 290,000 and displaced half the country’s population. “Today, the United States and Russia are announcing a plan which we hope will reduce violence, ease suffering and resume movement towards a negotiated peace and a political transition in Syria,” Kerry said.

The vexed question of Assad’s fate remains, with Western powers calling for his removal and Russia backing him.

But both Kerry and Lavrov said the complex plan represents the best available chance to end the fighting between the regime and the mainstream opposition rebels, while still targeting jihadists from former Al Qaeda affiliate Al-Nusra Front and the Islamic State group.

Key to the deal is the withdrawal of Syrian regime forces around rebel-held Aleppo, allowing desperately needed humanitarian access to besieged communities. Russia also needs to persuade the Syrian air force to stop strikes on anti-government positions, which have killed large numbers of civilians.

In turn, Washington has to get the opposition groups it backs to separate themselves from the former Al-Nusra, now called Fateh al-Sham Front, which has allied itself with a range of rebels at different points in the fluid conflict.

“The armed opposition in Syria now faces what is perhaps its biggest and most momentous decision since they chose to take up arms against the Assad regime in 2011,” said Charles Lister, a senior fellow at the Middle East Institute think-tank.

Mainstream rebels appear reluctant to withdraw from frontlines where Fateh al-Sham Front jihadists are also present because of fears the ceasefire will fail, he said. “For this reason alone, many opposition figures see the U.S.-Russia talks and whatever comes from them as a conspiracy against their long and hard fought for revolution. It will be hard to change this mindset.”

Only if commitments by Moscow and the Assad regime to cease violence for seven days are “fully met” will the U.S. and Russia start cooperating with joint strikes, the Pentagon said in a statement following the announcement.

Lavrov cautioned that Moscow could not “100 percent guarantee” that all the parties would obey the ceasefire. “The Syrian Government has been informed by us about these arrangements, and it is ready to fulfill them,” he added.

A truce agreed in February and endorsed by the United Nations Security Council has been repeatedly broken by both sides.

The final hours of the talks dragged out as Kerry contacted U.S. President Barack Obama’s office to get approval for the plan, but the top diplomat said both governments stand behind it. “The United States is going the extra mile here because we believe that Russia and my colleague have the capability to press the Assad regime to stop this conflict and come to the table and make peace,” Kerry said.

The U.N.’s Syria envoy Staffan de Mistura described the deal as a “window of opportunity,” and said he would discuss with U.N. Secretary General Ban Ki-moon when stalled political negotiations can restart. German Foreign Minister Frank-Walter Steinmeier hailed the deal as “a real chance” to bring in urgently needed humanitarian aid, but warned that “everything now depends on rapid implementation.”

Pro-regime forces have taken back a strategically important district on Aleppo’s southern outskirts, rolling back nearly every gain from a month-long rebel offensive there. The government advance further sealed off Aleppo’s opposition-held eastern districts.

In another major blow to the rebels, the military commander of the Army of Conquest, the largest rebel alliance, was killed in an airstrike, Islamist sources said on Thursday.

Is Putin the problem in Syria? “At some point there’s going to be a terrorist diaspora out of Syria like we’ve never seen before,” FBI Director Comey said.

Just ask, Who were the instigators of the Syrian genocide? It should be obvious to anyone who pays it attention and thought that the Syrian “rebels,” with their extensive supplies of weaponry, such as anti-tank missiles, and a complete command structure, had state supporters. The state supporters include NATO members, U.S., Britain, and Turkey, and Saudi Arabia. The plan was to topple Arab dictators in the Arab Spring, including Libya, Egypt and then Syria. Hillary identified herself as the she liberator of Libya when she said of Gaddafi, “We came, we saw, he died.” The Benghazi episode was about weapons trafficking of the Libyan military arsenal through Turkey into Syria, with the eventual help of Egypt’s replacement leader, the Muslim Brotherhood’s Morsi. But in December 2011 before the Benghazi episode, Sibel Edmonds reported that Islamist fighters were trained by the U.S. and Turkey back in May 2011 a few months before NATO overthrew Gaddafi.

What was the U.S. role? Sibel Edmonds says the U.S. was the director and producer of the play. Remember Obama and NATO member Britain overthrew Gaddafi, and Obama wouldn’t wait for the scheduled elections in Egypt. He insisted Mubarak step down immediately and elections immediately, with the expected result that the Muslim Brotherhood’s Morsi would win election. When Obama spoke in Cairo, he had insisted that members of the Muslim Brotherhood, outlawed in Egypt after the assassination of Anwar Sadat, be given front row seats. There he identified himself as a Christian, yet included a curious parenthetical in his description of the story of Isra: “when Moses, Jesus, and Mohammed (peace be upon them) joined in prayer.” He referred to America as having a partnership with Islam (not Egypt), and at the UN Obama said, “The future must not belong to those who slander the prophet of Islam.”

The Obama administration admitted in congressional testimony that it funneled over 600 tons of weapons to Islamist fighters in Syria. From one article (WSJ): “The utter failure of Western policy in both Libya and Syria has to be seen for what it is: not just a political blunder but a humanitarian crime.”

US and NATO troops train on the Syrian border, May 2011 a few months before NATO overthrew Gaddafi: https://www.youtube.com/watch?v=XNzSmIdr3JY