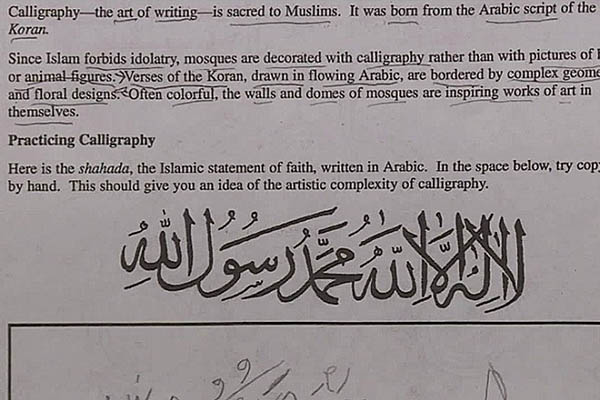 Assignment on calligraphy prompted outrage from residents of Virginia.

The homework assignment at a U.S. high school asked students to reproduce a sample of classical Arabic handwriting, to help broaden their appreciation of its “artistry.” Instead, it sparked an uproar—and even threats of violence—that led officials on Friday to temporarily shut down the entire school district.

It underlined simmering anti-Islamic sentiment in the United States following last month’s shooting in California by a married Muslim couple who drew inspiration from the Islamic State group.

The teacher, Cheryl LaPorte, asked students in her World Geography class at Riverheads High School in Staunton, Virginia to copy by hand an example of religious Arabic script. But a furor erupted as news about the homework task spread on social media.

The backlash was enough of a concern to prompt school officials to cancel classes—keeping all 10,000 of the county’s students at home and suspending school sports and other activities this weekend. The passage students were asked to transcribe was an expression of faith from the Quran—a detail, once it became widely known, which elicited even further public outrage.

“While there has been no specific threat of harm to students, schools and school offices will be closed Friday,” Augusta County school officials wrote in a press release. “We regret having to take this action, but we are doing so based on the recommendations of law enforcement and the Augusta County School Board out of an abundance of caution.”

The assignment had aimed to give students “an idea of the artistic complexity of calligraphy.”

“In the space below, try copying it by hand. This should give you an idea of the artistic complexity of calligraphy,” said the homework task.