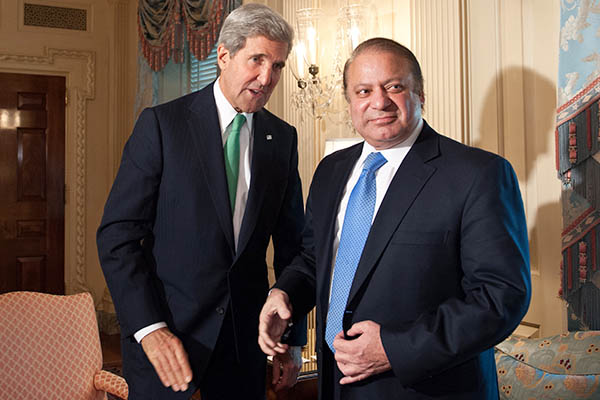 Congress has been asked to resume over $300 million in blocked assistance as ties between Washington and Islamabad improve.

The U.S. State Department has asked Congress to resume more than $300 million in blocked security assistance to Pakistan, officials said Sunday amid an upswing in relations and a visit by Prime Minister Nawaz Sharif.

“This is part of a long process of restarting security assistance cooperation after implementation was slowed during the bilateral challenges of 2011 and 2012,” said State Department deputy spokeswoman Marie Harf.

The development came as Secretary of State John Kerry met with Sharif, who is making his country’s highest-level official visit to the United States in years.

“We have a lot to talk about and the relationship with Pakistan could not be more important,” Kerry said at the start of the meeting. He called Pakistan a “democracy that is working hard to get its economy moving and deal with insurgency and also important to the regional stability.”

The State Department said the pair discussed counterterrorism cooperation, energy, trade and investment, and “the common interest in a secure and stable Afghanistan.”

“Both sides agreed on the importance of our continued counterterrorism cooperation, and that extremism is countered in part by opportunities arising from greater economic stability,” the State Department said.

Sharif was elected in May, and Washington has praised his efforts to reduce tensions in South Asia. Relations with the United States have also improved since they plunged to one of their lowest points in 2011 after U.S. commandos killed Al Qaeda leader Osama bin Laden during a raid in Pakistan and a U.S. airstrike left 24 Pakistani soldiers dead.

U.S. security assistance was interrupted during that period, although $857 million in civilian assistance continued to flow, Harf said.

“As part of our annual funding process, throughout the course of this past summer the State Department notified Congress of how it planned to program funds from several different accounts for various programs in Pakistan. Funding was notified to Congress following a rigorous planning process over multiple months, to ensure it was in line with both U.S. and Pakistani interests, and would deliver important results for both countries,” she said.

Harf said U.S. security assistance would build the capabilities of Pakistan’s security forces, “which is critical to countering violence in the western border regions.”

“And U.S. civilian assistance to Pakistan has delivered real results on the issues most important to Prime Minister Sharif and all Pakistanis: energy, education and economic growth,” she added.

Sharif is also due to meet President Barack Obama on Wednesday.

Washington needs Pakistan’s cooperation as it prepares to withdraw thousands of pieces of heavy equipment from Afghanistan before NATO combat operations end in late 2014. It is also looking to Pakistan to try to help with reconciliation efforts between the Taliban and Afghan leaders.

The United States wants the Pakistani government to do more to crack down on militant havens. Pakistan, meanwhile, chafes at continued U.S. drone strikes against militants on its territory.

Drones are “part of a very comprehensive conversation we have on security across the board,” a U.S. official said ahead of the talks. “As we talk about all these security issues that will be a key theme, not drones necessarily, but the security situation writ large.”