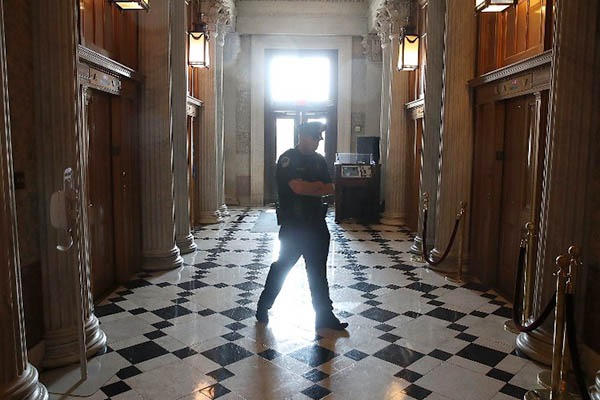 The U.S. Senate voted overwhelmingly on Wednesday to punish Russia over its alleged election meddling, passing a bill that would bar President Donald Trump from unilaterally easing existing sanctions on Moscow.

The vote at a time of high tension in Washington over the Russia scandal was 97-2.

The proposal was included in an amendment that must still win definitive approval from the Senate and from the House of Representatives. It would make congressional approval necessary if Trump seeks to suspend or ease sanctions imposed on Russia over its apparent cyberattacks during the 2016 U.S. election campaign. This new bill would also give sanctions imposed by then president Barack Obama via an executive order the full force of law. The sanctions target the Russian energy industry in particular.

The legislation would impose new sanctions against “corrupt Russian actors,” “those involved in serious human rights abuses,” Russians providing arms to Syrian President Bashar al-Assad’s regime or those engaged in cyberattacks on behalf of the government.

Russia’s interventions in Ukraine and Crimea and its support of Assad in the Syrian war are the other stated reasons for the sanctions, aside from the hacking that U.S. intelligence agencies say Russia engaged in aggressively with the alleged aim of helping Trump beat Hillary Clinton last November. These sanctions have been added to a bill—under debate and almost certain to win passage—aimed at toughening sanctions against Iran for what the bill calls its support of international terrorist acts.

“For too long, the message to Vladimir Putin has been that Russia can invade its neighbors, threaten U.S. allies, intensify its cyberattacks, and interfere with foreign elections with very little repercussion,” said Senator John McCain, a strident critic of the Russian leader. “Unless and until Russia pays a price for its actions, these destabilizing activities will continue,” he added.

Several more votes on the bill are scheduled in the Senate in the coming days before it can go to the House of Representatives.