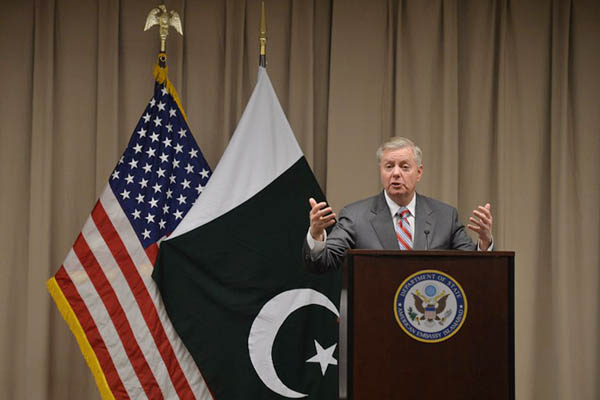 During a visit to Islamabad, the Republican leader says the two leaders would hit it off because ‘they have similar personalities’

The Republican—an influential ally of Trump—made the comments in Islamabad after meeting with the Pakistani leader, saying Khan was a “new partner” who could potentially help with a peace deal in Afghanistan.

“I’m going to urge him [Trump] to meet with the prime minister as soon as practical,” Graham told reporters, saying he believed Khan and Trump would “hit if off” because they have “similar personalities.”

“Prime Minister Khan is the agent of change that I’ve been looking for,” he added.

Ties between Washington and Islamabad have soured recently, with U.S. officials repeatedly accusing Pakistan of turning a blind eye to or even collaborating with the Afghan Taliban, which launch attacks in Afghanistan from alleged havens along the border between the two countries. Trump has repeatedly lashed out at Pakistan’s alleged duplicity, saying late last year that Islamabad does not do “a damn thing” for the U.S.

Khan has been equally critical of Trump, saying before 2018’s election in Pakistan that a potential meeting with the U.S. president would be a “bitter pill” to swallow.

The U.S. lawmaker’s trip to Pakistan comes as American officials have held several rounds of talks with Taliban representatives. Graham said a meeting between the two leaders was vital to carve out a potential deal in Afghanistan.

“They actually need to meet and come up with a agenda that will push a resolution to the war in Afghanistan,” the senator added.

Graham—once a potent critic of Trump—has transformed in recent months into an ardent defender and influential ally of the president. The senator’s arrival also overlapped with an ongoing trip by U.S. special envoy Zalmay Khalilzad, who has been shuttling around the region for months to build support for the peace initiative.

Khalilzad was in Kabul last week and then flew to Pakistan were he also met with the prime minister on Friday as news reports in Pakistan suggested Islamabad was open to hosting the next round of talks with the insurgents.

The Taliban, however, have threatened to suspend the fledgling peace efforts, accusing Washington of changing the agenda of the talks and “unilaterally” adding new subjects.

Graham’s trip also comes after U.S. officials announced in December that Trump intends to withdraw as many as half of the 14,000 U.S. troops deployed in Afghanistan. The meetings are the latest in a flurry of diplomatic efforts aimed at bringing the Taliban to the table for negotiations with the Afghan government on ending the conflict which began with the U.S. invasion in 2001.