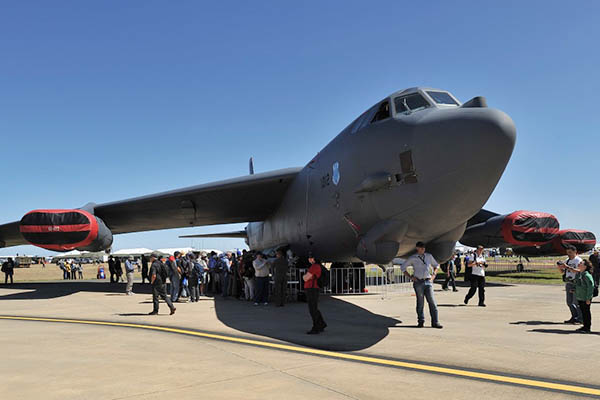 The U.S. Air Force is deploying massive B-52 Stratofortress bombers to the Gulf in response to an alleged possible plan by Iran to attack American forces in the region, the Pentagon said on Tuesday.

Several nuclear-capable B-52s are heading to the region along with an aircraft carrier task force following what the Defense Department called “recent and clear indications that Iranian and Iranian proxy forces were making preparations to possibly attack U.S. forces.”

“The deployment of the USS Abraham Lincoln Carrier Strike Group and a bomber task force are considered a prudent step in response to indications of heightened Iranian readiness to conduct offensive operations against U.S. forces and our interests,” said acting Pentagon spokesman Charles Summers in a statement. “We emphasize the White House statement that we do not seek war with the Iranian regime, but we will defend U.S. personnel, our allies and our interests in the region.”

The deployment was first announced late Sunday by John Bolton, President Donald Trump’s national security adviser, who said the move was “a clear and unmistakable message to the Iranian regime that any attack on United States interests or on those of our allies will be met with unrelenting force.”

The U.S. move comes in response to intelligence about a threat orchestrated by Iran, officials said, but details of the threat have not been disclosed.

Navy Captain Bill Urban, the spokesman for the U.S. military’s Central Command, which spans the Middle east, said the threat could be land-based or maritime. He said the Lincoln strike group was already scheduled to head to the region on long-planned deployment but that its arrival in the Gulf has been accelerated due to the threat. That led to the cancellation of a planned port visit by the Lincoln to Split, Croatia.

The multinational carrier group, including several ships, multiple types of aircraft, and 6,000 personnel, will be deployed “where it will best be able to protect U.S. forces and interests in the region and to deter any aggression.”

The deployment comes a year after Trump pulled the United States out of a multinational accord under which Tehran drastically scaled back its sensitive nuclear work. Since then, the Trump administration has ramped up menacing rhetoric against Iran while tightening economic sanctions on the country.